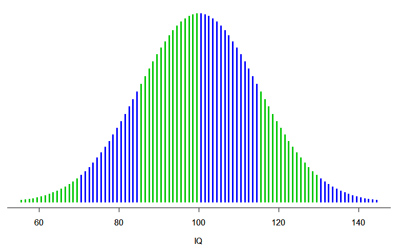 Like genius, intelligence can be difficult to quantify. Psychologists and neuroscientists study intelligence extensively. An entire field of study, known as psychometrics, is devoted to studying and measuring intelligence. But even within that field, experts don't always agree on exactly what it is or how best to analyze it. And while intelligence is central to genius, not all geniuses score well on intelligence tests or perform well in school.

Intelligence testing has existed for thousands of years. Chinese emperors used aptitude testing to evaluate civil servants as early as 2200 BC [ref]. The tests we know as IQ tests got their start near the end of the 19th century. Today, IQ tests generally measure a person's memory as well as language, spatial and mathematical abilities. In theoretical terms, these tests measure a concept or factor known as g. You can think of g as a unit of measure or a way of expressing the amount of intelligence a person has.

IQ tests are also standardized so that most people score between 90 and 110. When placed on a graph, the IQ test scores of a large group of people will generally resemble a bell curve, with most people scoring in the average range. A common perception is that anyone scoring above a certain number -- often 140 -- is automatically a genius. But in spite of the existence of high-IQ organizations, many scientists caution that there is no such thing as a genius-level IQ.

Many educators and researchers feel that, in general, standardized IQ tests do a good job of predicting how well a child will perform in school. Schools often use these tests to determine which children to place in gifted or special education classes. Most colleges and universities and some employers also use standardized tests as part of their application processes.

However, in spite of their prevalence, these tests are not foolproof. In general, some minorities and people with lower income levels tend to score lower than people from other racial and economic groups. Critics contend that this makes IQ tests invalid or unfair. Others argue that they instead point out unfairness and prejudice within a society.

Many parents and educators feel that these categories more accurately express the strengths of different children. But critics allege that Gardner's definitions are so broad and inclusive that they make intelligence meaningless.

Are we getting smarter?

For several years, scientists have noticed a general upward trend in the general population's IQ scores. It has seemed that each generation is a little smarter than the one before it. Researchers aren't sure whether improvements in education, nutrition, medical care or society in general are responsible for this trend, which is known as the Flynn effect.

One of the stereotypes surrounding gifted children is that they have trouble fitting in at school. Several scientific studies suggest that the stereotype has a foundation in reality. A Purdue University study of 423 gifted students suggested that they were susceptible to bullying. A 20-year study of gifted children ending in 1940 suggested that the trend of not fitting in continues into adulthood. The study used a test that measured both verbal intelligence and personal adjustment. People who scored above 140 in verbal intelligence generally had lower personal adjustment scores.