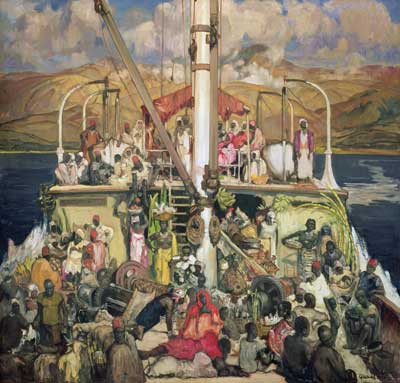 Banana superstitions may have originated with the banana boats of the Caribbean trade.
Fernand Allard L'Olivier/Getty Images

Two of the most enduring crab boat superstitions have to do with, of all things, bananas and suitcases. In both cases, these items are strictly forbidden onboard.

Many charter fishing boat crews have steadfast restrictions about bringing bananas on the boat. In fact, they'll return to the dock to purge the offending fruit [source: ESPN]. Some charters go so far as to prohibit Banana Boat brand sunscreen or Banana Republic brand clothes onboard. Fishermen have even been known to object to Fruit of the Loom underwear (one sport fisher claimed he's treated wearers to wedgies and then cut the labels out) [source: LA Times]. Oddly enough, the Fruit of the Loom graphic doesn't even have a banana on it, and some say the banana was left off because of this very superstition [source: Brincefield].

There are many theories on why people believe bananas are bad luck for a boat. One superstition is that boats carrying bananas don't catch fish. The origin of this belief dates back to the Caribbean trade of the 1700s. The wooden sailing boats of that time had to move quickly to deliver bananas before they spoiled, and fishermen had a hard time trolling for fish on such fast-moving boats, which is how the superstition came about. Another superstition that originated during that time is that bananas will cause a boat to sink. This belief developed after many boats never made it to their destinations, and all of the doomed boats were carrying bananas.

One of the creepier superstitions is that banana cargo could actually kill a man. In actuality, fermenting bananas do give off methane gas, which could conceivably get trapped below deck and kill any crew members unlucky enough to be working in the hold. Another popular theory was that venomous spiders hitched rides in bananas, and once those bananas were onboard, the boat would be host to any number of lethal critters. And then, of course, there's the theory that banana peels cause crew members to slip and fall on deck [source: Attah].

Suitcases onboard is a fishing boat no-no as well. Even when camera crew boarded crab boats to film Discovery Channel's reality series "Deadliest Catch," they were asked to leave their equipment suitcases on the dock [source: Deadliest Catch].

The origins of the suitcase superstition are murky, and the superstition has variations. For example, some sailors are superstitious of all luggage; some only ban black suitcases and bags. But everyone seems to agree that a suitcase is a harbinger of death or illness. Black bags are considered bad because black is the color of death and a metaphor for the depths of the dark, cold sea. Some fisherman say that travel bags resemble body bags, another obvious symbol of death.

Why do crab boat captains and crew hang on to these superstitions? Probably for the same reason the superstitions began. Even with modern understanding of science and weather patterns, we still perceive the sea as a mysterious and treacherous place. Beliefs and superstitions are passed down from generation to generation, from fisherman to fisherman, and it's a brave sailor who turns his (or her) back on tradition. Would you be willing to see what happens when you reject a centuries-old superstition?

Yes, we have no bananas -- but we do have some interesting links below.