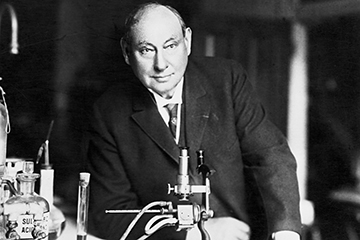 They say the easiest way to a man's heart is through his stomach. Turns out, the same can be said about a politician's vote. At the turn of the 20th century, numerous revelations about questionable handling and dangerous additives led Congress to pass a food safety law. Known as the Food and Drugs Act, it eventually led to the creation of the FDA, the United States' oldest federal consumer protection agency.

The origins of the FDA go all the way back to 1862. As the boom of Civil War cannons echoed across the hills of the American South, President Lincoln appointed chemist Charles M. Wetherill to analyze agricultural materials like food, soil and fertilizer in the newly formed Department of Agriculture.

After some two decades of food adulteration investigations, his successors, Peter Collier and Dr. Harvey W. Wiley, became convinced the country needed a law to regulate food and drug contents and quality. Wiley was particularly proactive, going so far as to recruit a group of healthy young men known as "The Poison Squad" to serve as human lab rats for experiments with common, and often poisonous, food additives. Partly because of Wiley's work, Congress considered more than 100 food and drug bills between 1880 and 1905 [sources: Swann and FDA, "Dates"].

By 1906, however, Congress — heavily influenced by food packing and canning lobbyists — had yet to pass a comprehensive food and drug law. The tipping point was the publication of a novel that was so disgusting, lawmakers had no choice but to act: Upton Sinclair's "The Jungle." Though technically fiction, the novel was based on Sinclair's undercover work in Chicago's meatpacking plants, and it detailed conditions like the rat-infested mystery meat. One of his most famous claims was that workers who fell into the meat hoppers were sometimes ground in with the rest of the meat!

In response to these shocking allegations, President Theodore Roosevelt ordered an investigation that verified all of what Sinclair had claimed — except for the human hamburger part. On June 30, 1906, Congress passed the Food and Drugs Act (also known as the Wiley Act), prohibiting the trade of mislabeled and contaminated food, beverages and medicines across state lines. Wiley's Bureau of Chemistry was tasked with enforcing the new law, making it the first real predecessor of the modern FDA [source: Sinclair and FDA, "Dates"].

What exactly was on the menu for the brave (crazy?) young men of The Poison Squad? Borax, sulfuric acid, saltpeter and formaldehyde, just to name a few of the dangerous chemicals Wiley fed them. One of the most horrific was copper sulfate, a substance used to make canned peas appear bright green. It also happened to cause nausea, diarrhea, vomiting and jaundice, in addition to liver, kidney and brain damage, which is probably why it's used for another purpose today — as a pesticide [source: Watson].