Why can't I reach the end of a rainbow?

by Marshall Brain
Next 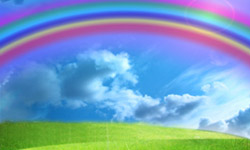 Why can't I reach the end of a rainbow?
Hemera/Thinkstock

You can't reach the end of the rainbow because a rainbow is kind of like an optical illusion. A rainbow is formed because raindrops act like little prisms. The raindrops split light up into bands of color. The colors you see in a rainbow come from millions of raindrops that are sitting at different angles in the sky. These raindrops split the sunlight into colors for your eyes to see.

When you move toward the rainbow, the angles change. So millions of different raindrops create the new rainbow with the new angles. In order for the angles to work out, the raindrops have to be a certain distance from your eyes. So no matter how you move, the rainbow will always be the same distance away from you. That's why you can never reach the end of the rainbow.