Does sleeping after learning make you smarter? 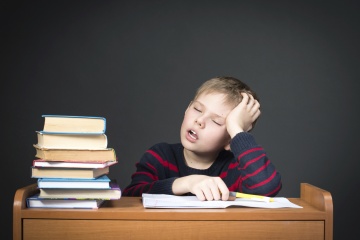 We've all been there - dosing off while studying for a big test, but does sleeping after you learn help in every instance?
p_ponomareva/Thinkstock

Sleeping after learning won't necessarily make you smarter, but it does help boost memory and allow the brain to process information more efficiently. In 2008, researchers in Germany asked participants to memorize a list of 30 words as part of a study on sleep and learning. After some time spent memorizing the list, some of the students were given a chance to nap while others were asked to stay awake. When the students were quizzed on how many of the words they could remember from the list, those who hadn't napped remembered fewer than seven words on average. Those who slept for just six minutes remembered an average of eight words, while those who napped for 36 minutes remembered nine or more. Not only did napping provide a memory boost, but it only took a brief snooze to make a difference in recall [source: Harvard Medical School].

Another study conducted in 2010 suggests that napping not only gives you better recall, but may allow you to pull together information in a way that can help you solve problems. As part of the study, students were asked to navigate a complex maze, then take a 90-minute nap. Those who reported dreaming about the maze while napping actually did better than those who didn't dream of the maze when asked to navigate the maze a second time. This indicates dreaming can organize and consolidate information, making it more useful to you later [source: Harvard Medical School].

Other research indicates that sleep not only restores the brain, but actually increases your ability to learn. At the start of a 2010 study, a group of students were tested on fact-based memories and all performed about the same. Half the group was then asked to take a 100-minute nap, while the other half of the group stayed awake. When the participants were tested again that evening, those who had napped actually performed better than they had originally, while the students who hadn't napped performed worse [source: Mander et al].

It's possible that the brain simply gets so full of information that it can't operate effectively after an extended period without sleep. Scientists have discovered that while you're awake, your brain stores memories in your hippocampus. After too long without sleep, this part of the brain gets sluggish and overworked, leaving you less equipped to learn or even function at your best [source: Anwar]. When you sleep, the brain transfers memories and information out of the hippocampus, depositing them in the prefrontal cortex for long-term storage. With your short-term memory station free and clear, your brain is better-equipped for learning and memory when you awaken.

How edX Works
Deaf, Blind and Determined: How Helen Keller Learned to Communicate
Teaching Typing May Be a Waste of Time