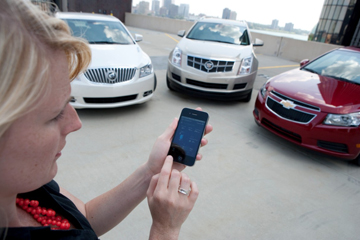 Cars are becoming more like rolling computers every day, and the telemetry they can collect and send to dealerships, marketers, and back to the R&D lab at the manufacturing site is vast.
(© General Motors)

Americans were shocked -- shocked, I tell you! -- when they learned in early 2013 that the government was collecting data on their cell phone communications and their Internet usage and had been for, like, a decade. But did we really think NSA stood for No Snooping Allowed? Of course not. If there's data available, these guys will mine it.

Speaking of mining data, there's a whole new mother lode of information for their virtual pickaxes, and it's in your car. And you might even have specifically asked for it to be there, too. Your infotainment system that streams Netflix, your GPS, your tollbooth transponder that keeps you from having to toss quarters in the dish -- all of these devices are transmitting data all the dang time. And that's not all: Your in-car security system is transmitting your data, too. So are systems like OnStar or the insurance monitor that gives you a discount for safe driving. (You know ... the one you're supposed to plug into your car's data port underneath the dash.) And while the government may not be interested in all this data (but they might be), a force far darker is definitely interested: marketers. Check the fine print on any agreement and you'll almost certainly find that third parties can access information, including your exact location, in order to someday offer in-car ads for gas stations, restaurants, or other nearby shops and services. Creepy or convenient? You decide.

Nearly all new cars also have "black boxes," which definitely sounds sinister. These are similar to the data collectors used on airplanes in the event of a crash. For automobiles, however, these black boxes record information like vehicle speed, if (or exactly when) the airbags deployed, if the seat belts were buckled, exactly how hard the driver slammed on the brakes (if at all), among other things. All of this data can be very useful for improving safety and reducing future crashes with new technology; however, this data could also end up in the hands of the lawyer of the guy who's suing you for crashing into his client.

In the eyes of the law, vehicles have a lowered expectation of privacy, as the legal eagles put it. In other words, your car is not quite as private as your house or your pockets when it comes to search and seizure. The Fourth Amendment of the U.S. Constitution protects citizens against unreasonable search and seizure, which means the police must have a warrant to search your home. But since vehicles are less private than a residence, a warrant isn't always necessary if cops think you've got a trunk full of stolen gold bullion. (Because that's certainly what you would have if you had stolen anything, right?) And in 2012, the U.S. Supreme Court ruled that if a police officer shoots a GPS tracker onto your bumper with a dart, that counts as a search of your property [source: Kravets]. Those GPS dart-shootin' cops need to have a warrant (well ... sometimes, but not always) if they're going to track your movements for very long.

Author's Note: Do you have the right to privacy when you're in your car?

Someone recently said -- and I wish I could remember where I read this -- "You can either have the Internet or privacy." It's sucky, but that does ring true. So it only makes sense to me that inviting the Internet into your car is going to further reduce the privacy you think you have there. Cars are becoming more like rolling computers every day anyway, and the telemetry they can collect and send to dealerships, marketers, and back to the R&D lab at the manufacturing site is vast. Even if manufacturers and app developers spell out your privacy rights and lack thereof, when was the last time you read an entire user agreement before clicking "accept" and telling the app to hurry up already?

I was surprised that SCOTUS (that's Supreme Court of the United States, for those of you who aren't obsessed with their decisions) ruled to make it even slightly more difficult to track vehicles. Score one kind of weak but important point for privacy.

When One American's 'News' Is Another's 'Propaganda'
Why We Use the Suffix '-Gate' for Scandals (And Can We Please Stop?)
From Prison to Peace Park, a Plan for Guantanamo