Do fish have ears? 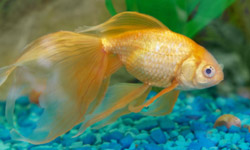 Do fish have ears?
Hemera/Thinkstock

Let's talk about your ears first. You have ears that are obvious. There are two big earlobes on the sides of your head, and tubes called the ear canals that connect to the eardrum.

Inside your ear you have two parts. The first part lets you sense vibrations in the air. Air vibrations move your eardrum, and nerves send the movements to your brain. The second part gives you your sense of balance.

Fish do not have earlobes, but they can have openings like ear canals (often many of them). They have the same kind of balance sensors you do. And they do have a way to sense vibrations in the water. These vibration sensors are laid out in two lines along the sides of the fish. It's called the lateral line system.

The Case for Kids Walking to School by Themselves
What Makes One Pencil Superior to Another?
National Science Teachers Association Convention 2001