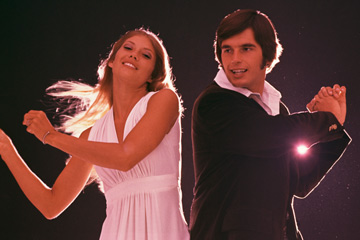 A night at the disco
Dennis Hallinan/Getty Images

One of the most enduring images of the disco era is John Travolta in the 1977 film "Saturday Night Fever." He wears a white suit, his black shirt open to expose his chest. His hair is carefully styled, and he's certainly not wearing sneakers, but rather high-heeled dancing shoes. A night of disco dancing was not to be undertaken in flip-flops or jeans -- both men and women spent a lot of time perfecting their looks. Disco fashion was bright, tight and meant to catch the eye.

People went dancing in what was considered the height of fashion, even though 70s fashion can look dated and tacky to a contemporary eye. Clothing was often made of polyester and spandex in hues such as silver and gold. It was meant to show off a person's body, so fabric was either skintight or barely there. Sequins and leopard prints were widespread, and a person could never wear too much jewelry. Shoes were high -- platform shoes and sharp stilettos were abundant on the dance floor. And big hair was in; men styled their hair in large pompadours, while afros and teased styles were popular for both men and women. You probably would have found drugs in many people's pockets, too, as Quaaludes and LSD were popular on the disco scene.

The amount of time that both men and women spent on their attire for a night of dancing led some people to claim that disco culture and the people within it were just as vapid as the music. Clubs such as Studio 54 in New York City only allowed the finest dressed celebrities in the door, which led the masses to spend even more time on their looks in the hopes they'd get past the velvet ropes. Disco music had originally been novel because it got everyone, gay or straight, black or white, dancing together. The velvet ropes and dress codes of the most popular nightclubs, however, led to a quick segregation by class. For instance, rock and roll fans, in their blue jeans and T-shirts, claimed disco was too divisive and exclusive.

Did those rock and roll fans have a point? Did disco die because it got too big for its bell-bottomed britches, or did other factors cause its demise? Find out on the next page.