What is binge watching?

Browse the article What is binge watching? 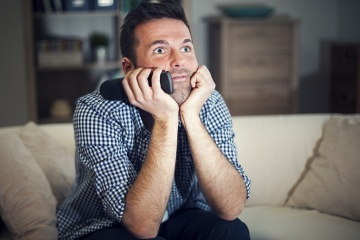 Like all addictions, binge watching can be hard to break. Why play it old school and wait to watch the next episode when you can just barrel right through a whole season?
gpointstudio/Thinkstock

I miss Walter White. Sometimes I even get lonely for Jesse Pinkman. Once, fresh off a weeklong binge in which I viewed all five seasons of "Breaking Bad," I thought I saw Pinkman on a downtown sidewalk. When I slowed my car he cinched his hoodie and walked nervously on. Maybe his paranoia was Blue Sky-induced or caused by the strange woman pressing her face against the window. Either way, it was an awkward exchange that didn't reveal Pinkman at all, just the hopefulness of my imagination, the same fuel that makes me long for the Albuquerque desert or stare wistfully at old RVs.

Binge watching, or binge viewing, the term for watching multiple episodes in rapid-fire sequence, has been around since the 1990s when television series were released in DVD box sets. In 2013, "binge watch" made the Oxford Dictionaries Word of the Year short list. That same year, a majority of participants in a Netflix survey not only reported regular binge watching but also said they preferred episodes to be released in "season" bundles. It made sense, considering these survey participants watched an average 2.3 episodes in one sitting. Overall, these survey participants and other polled viewers have revealed the sweet spot for finishing a series seems to be a scant one-week timeframe, a revelation that speaks to the addictive power of binge watching [source: Oxford Dictionaries, West, Jurgensen].

It's a power many of us have experienced. Spend a week binge watching 60-plus episodes of "Breaking Bad," or any other series, and it's sure to change your viewing habits. You'll squirrel-away unwatched installments so you can view them all in roaring succession. You'll laud Netflix, Amazon and other providers for releasing entire seasons of original content, then mark the days until they do it again.

There's even a term for people who are eyeball-deep in a series to the detriment of normal human functioning — "no life" — and it has a ring of truth. Ask anyone who's marathon-watched every episode of "House of Cards" or "Parks and Rec." The characters get in your head and push everything else out. At 3 a.m., when you're in pajamas eating cereal straight from the box, you'll still want to watch just one more episode. It's an itch that can't be satisfied if there are shows waiting in queue.

There are some who argue binge watching will be the ruin of serial television because it removes the watching/waiting rhythm and built-in drama of the cliffhanger. I wonder if this is a bit like arguing that telephones need cords to maintain their integrity [source: Pagels].

The beauty and danger of binge watching is the push-pull of its appeal and anguish. Just when I'm hitting play for the fourth time and thinking "all you episodes get in my head," I'll naturally feel some remorse. I may have thought "Orange was the New Black," but a binge-viewing hangover was the new black all along.