Browse the article What is reality TV's influence on culture? 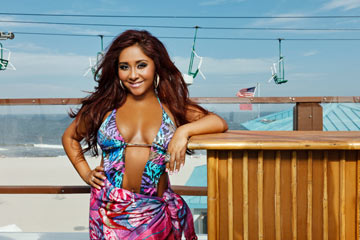 Snooki was paid more to address students at Rutgers University in March 2011 than Nobel Prize-winning author Toni Morrison was offered to give the May 2011 commencement address.
MTV

Perhaps no test in a high-school student's career is as vexing as the SAT. When a question on reality television appeared on the 2011 exam, some students cried. The question read, "How authentic can these shows be when producers design challenges for the participants and then editors alter filmed scenes?" [source: Steinberg].

"This is one of those moments when I wish I actually watched TV," one test-taker wrote on the Web site College Confidential. Another bemoaned: "I don't watch TV at all so it was hard for me. I have no interest in reality TV shows..." One student looked at the question and wrote an essay about Jacob Riis, the 19th-century reformer. "I kinda want to cry right now," the student lamented [source: Steinberg].

Those who create the SATs defended the question. The essay, they said, was designed to gauge the students' writing skills. But some experts think there may be something more going on here.

Reality television has slithered into our culture. Whether it's our fascination with the "Bachelor" or "Mob Wives," reality TV dominates our lexicon, our water-cooler gossip and even the way we dress. Consider that more than a few heads turned when "Jersey Shore" star, Nicole "Snooki" Polizzi, received more cash to address students at Rutgers University in March 2011 than Nobel Prize-winning author Toni Morrison did to give the commencement address in May. Snooki's advice to students: "Study hard, but party harder" [source: Oldenburg].

Reality TV is essentially television programming in which there are no writers, actors or scripts. Instead, the shows focus on "real" events or situations. Some reality programming comes in the form of competitions shows, such as "Survivor" or "The Amazing Race." Others, such as "Teen Mom" and "Hoarders" focus on specific lifestyles.

TV based on reality has been around in some form or another since the 1940s. But the first reality show was broadcast in 1973, when PBS aired a 12-part documentary called "An American Family." The show chronicled the daily lives of the Loud family, who lived in Santa Barbara, Calif. The series showcased marital tensions that eventually led to divorce, as well as the Louds' eldest son's gay lifestyle [source: PBS].

Many critics slam today's realty television for its lack of class. And there are some good points to that argument. Go to the next page to see how realty TV is influencing our lives -- whether we watch or not.

Effects of Reality TV: The Ridiculous 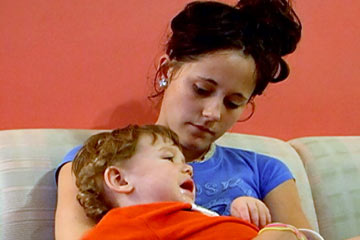 Although many say MTV's "Teen Mom" glamorizes teen pregnancy, some believe the show acts as a form of "high-tech" birth control.
MTV

For many, reality television is the lowest form of entertainment, an insult to our collective intelligence. In their view, reality TV lauds crass behavior and creates a voyeuristic peep show. It glorifies abuse, elevates shallow personalities and promotes dysfunctional relationships.

Yet, we watch. But why? Is it because reality TV is like passing a car wreck on the highway -- we just have to look? Experts say our fascination has less to do with voyeurism and more to do with ourselves. According to Ohio State University psychologist Steven Reiss, some people watch reality TV because it makes them feel superior. Others watch because they want to see other people humiliated [source: Jaffe].

What else could explain our fascination with "Puck," one of the first reality TV stars of MTV's "Real World." Puck routinely picked his nose and shouted homophobic obscenities at his gay roommate.

Some psychologists say that such behavior on television has made popular culture into a cesspool of amoral behavior. Or perhaps, the reverse is true: If people did not want to view reality shows, then we wouldn't watch them [source: Taylor]. Some psychologists believe that reality TV is a witch's brew of deceit, vengeance and spite [source: Taylor].

Big deal! It's only television. Yes, but critics say that some shows glorify bad, and sometimes criminal, behavior. Remember Tareq and Michaele Salahi who crashed a White House state dinner in 2009, hoping to land a spot on the "Real Housewives of Washington?"

Reality TV relies on the willingness of ordinary individuals to have their lives played out in front of a camera. That mentality spills into our every day existence. We think nothing of being filmed by street corner surveillance cameras or store security systems.

Many say reality TV has put America through a cultural meat grinder by making stars of ordinary people who have little or no talent. Snooki, Kate Gosselin, Bethenny Frankel. Remember Omarosa Manigault-Stallworth from the original run of "The Apprentice?" Chances are you don't. Reality stars are picked from obscurity, and many end up back there. Some can handle fleeting fame, while others try desperately to hold on to it. They spend most of their time after the show seeking the rush once felt with becoming an instant celebrity [source: Rooney].

The lure of instant fame is overwhelmingly real for some. Ten percent of British teenagers say they would abandon their chances of a good education if they could become a star on reality television. The teens were motivated by money and success [source: Cassidy].

Still, there is some good to reality TV. You just have to look deep to find it.

Effects of Reality TV: The Good

For Heather Havrilesky it was more than stuff. It was her father's life. Photographs of old girlfriends she never met. Books. An old driver's license. Heather's father had died, but as she writes, "how do you say goodbye to someone else's things without losing a piece of that person forever?" [source: Havrilesky].

Then Heather began to watch TV shows about hoarders. She decided to do something about her own problem. She went into a "cleaning frenzy, rifling through my closets and driving big bags of old stuff to Goodwill" [source: Havrilesky].

Such is the power of reality television. While many people think that reality TV is nothing more than a series of freak shows, some serve the greater good. A good deal of what is on TV can be very useful to the viewer. Although hoarders have been around for centuries, shows such as "Hoarders" and "Hoarding: Buried Alive" have increased public awareness about a serious mental health issue [source: Pina]

While reality shows are mainly produced as entertainment, many convey important information about diet, weight loss, health and fitness [source: Kaiser Family Foundation]. For example, although many say TV's most controversial reality shows, MTV's "Teen Mom" and "16 and Pregnant," glamorize teen pregnancy, some believe the shows act as a form of high-tech birth control [source: McMahon].

In 2009, the teenage pregnancy rate in the United States dropped to its lowest levels in 70 years. The National Campaign to Prevent Teen and Unplanned Pregnancy released a survey in 2010, in which 87 percent of teens who had watched MTV's "16 and Pregnant" felt the show educated them about becoming a parent at such a young age. Only 17 percent felt the show glamorized teen pregnancy [source: McMahon].

Reality shows also reflect a more diverse nation. A 2008 report released by the NAACP said non-whites are underrepresented in almost every aspect of the television industry -- except for reality programming. It's not that reality shows are more racially or culturally sensitive. Frankly, mixing people of different races, genders, sexual orientation and cultures creates conflict, and conflict sells [source: Braxton].

And, at the end of the day, isn't making money what reality TV is really all about?