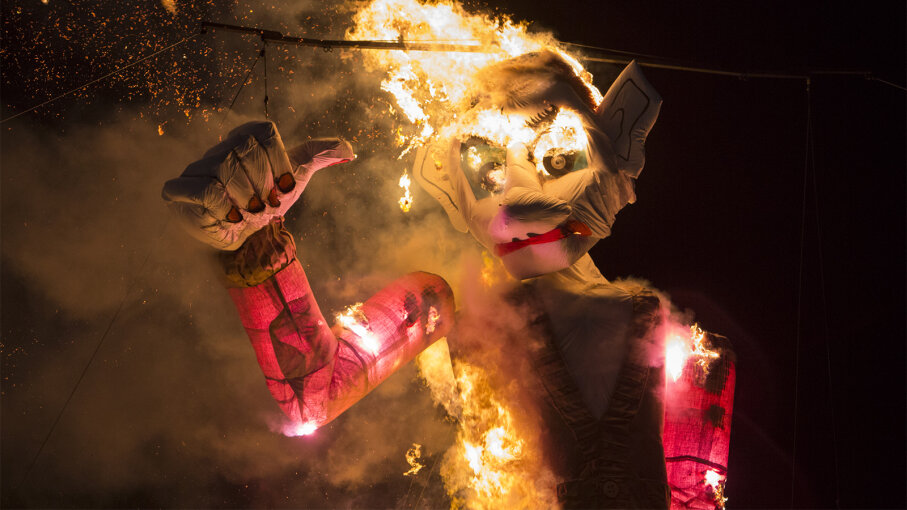 Old Man Gloom goes up in flames at the 93rd annual burning of the Zozobra on September 1, 2017 in Santa Fe, New Mexico. Adria Malcolm/Getty Images

Do you ever wish you could just burn all your troubles to the ground and start fresh? Then you might want to consider a move to Santa Fe.

That's because the New Mexico capital has an annual tradition built around the very concept of setting your sorrows ablaze. The sacrificial subject of this fiery ritual is a giant, animated effigy known affectionately as Zozobra or Old Man Gloom, and residents have been cheering on his flaming demise for almost a century.

It all started in 1924 when local artist William Howard Shuster, Jr., teamed up with fellow creatives to construct a creepy character that people could project all their icky feelings onto ... and then light on fire. The creators were inspired by the Yaqui Indian tradition of Holy Week, during which a firecracker-filled effigy of Judas is led around the village on a donkey, and ultimately set ablaze.

The first iteration of Zozobra (which means "anxiety" in Spanish) was a 6-foot-tall (2-meter-tall) puppet who made his debut in Shuster's backyard at a private party. Two years later, he showed up at Fiestas de Santa Fe, an annual September festival, and has been wowing crowds ever since.

Zozobra awaits the flames of destruction in Santa Fe, New Mexico, in 2007.
Wikimedia Commons (CC By-3.0)

While the eerie entity has significantly evolved over the last 95 years (he's now a 50-foot-high [15-meter-high] marionette made of muslin and stuffed with hundreds of bags of shredded paper), the concept of Zozobra remains the same: He's part-ghost, part-monster and he's "the enemy of all that is good." As legend has it, he casts a spell of darkness and despair over Santa Fe each year and is born from the bad deeds of everyday people. The goal, of course, is to lure this evil guy out into the light of day and send that sucker up in flames in order to snuff out his supremely wicked ways.

To bring Zozobra out of hiding, city leaders invite the bad guy to Fiestas de Santa Fe, and supposedly his out-of-control ego can't resist the chance to show up and crush dreams. Each year, he materializes in the same spot — Fort Marcy Park, the former site of the first Army installation in the southwest. Apparently, he gets especially riled up that residents have kept him waiting, so he casts a spell on the Santa Fe children to become his minions (called Gloomies!) and, in the process, he swaps all the joy in their minds with deep sadness (nope — it's not exactly a Disney fairy tale). As the little Gloomies prepare to raise hell, a group of torch-bearers show up to save the day, freeing the kids from hypnosis and crying "Burn him!"

All that impassioned chanting summons Zozobra's mortal enemy: the Fire Spirit. Torches emerge, dancing ensues and, eventually, Zozobra meets his fiery fate. During this dramatic burning, the crowd dances and sings the Fiesta Song, ready to usher in happiness and optimism, which will last until the following year.

If you're dying to see this spectacle up close and personal (and perhaps project some of your unwanted memories of the year onto the flames), you can catch the Burning of Zozobra every year in Santa Fe on the Friday before Labor Day.

Now That's Interesting
The Kiwanis Club of Santa Fe, which has been responsible for Zozobra since 1964, has been planning an epic blowout for Zozobra's 100th anniversary in 2024. In preparation, the club has put together The Decades Project, a comprehensive examination of Zozobra's life (and annual death).