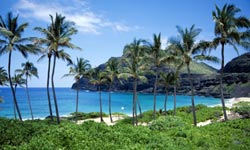 Escaping to your favorite tropical island is as easy as putting on some bossa nova music and cooking up a spicy supper! See more pictures of paradise.
Brand X Pictures/Thinkstock

When you hear the word "tropical," where does it take you? Does your mind wander to a Caribbean island, surfing in Hawaii or somewhere even farther away, like Bali? These areas are all considered tropical destinations, of course, but a tropical place isn't limited to sandy beaches to bake on or volcanoes to hike.

So what areas of the world are considered "tropical" and "temperate?" The Koppen Climate Classification System is a very accessible guide to the general climate of the regions of the planet. It classifies earth into five distinct climate zones -- lettered A, B, C, D and E -- with subdivisions to further break down climate distinctions.

"A" signifies tropical climates, known for high temperatures year-round, as well as a large amount of year-round rain. This can be anywhere in the Caribbean Sea, central Africa, all of India and the entire region of Indonesia and Fiji, as well as northern Australia. "C" signifies temperate climate areas, signified by warm summers with little rain and cooler winters with more precipitation (source: Blue Planet Biomes). Temperate climates include the southeastern United States, the southeastern part of South America, western and southern Australia, central and northern Asia, and western Europe such as France, England and Spain.

So, if you're not lucky enough to live near crystal clear waters, sandy beaches or just a hot climate year-round, you can still conjure up the tropics in your own home.