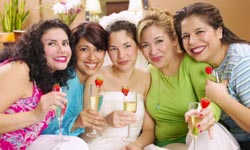 Whether your wedding shower guest list is all female or co-ed, these games will be fun for everyone.
Creatas/Thinkstock

There's a charming fable about the origin of wedding showers. Sometime way back in the past, a young Dutch couple wanted to get married. But without a dowry, which the girl's dad couldn't (or wouldn't) provide, the wedding was off. Until the village stepped in, that is. Friends gifted the girl with items she'd need to establish a home with her chosen man. The marriage took place, and the couple, we choose to believe, lived happily ever after.

By the 1950s, showers had become obligatory, formulaic rituals. Traditionally women-only, wedding showers have their own set of rules governing when the party takes place, who is invited, what to bring, when to eat, who hosts the party -- and who shouldn't. The practice of showering a bride-to-be with gifts has several functions. It shows community support for the marriage, gives the bride practice at being the center of attention prior to the big day and prepares everyone involved for the bride's status change from single to married. And, let's be honest, accepting all those gifts makes it harder to back out of the wedding.

Believe it or not, the games have a purpose. Wedding showers often bring together, in an atmosphere of strict etiquette, a group of people who don't know each other and have only the bride or groom in common. Games help guests get talk with each other and get into a festive mood, and they can cater to multigenerational groups, women-only showers and couples' showers. Get a handle on fun with the games that follow.