From the Devil to the Lizardman: A Brief History of Tongue Splitting 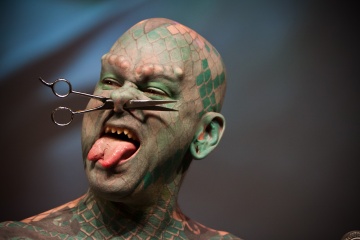 Erik Sprague (aka "The Lizardman") shows off some of his body modifications (split tongue, subdermal implants and sharpened teeth among others) at the Copenhagen Ink Festival in 2011.
© Gonzales Photo/Demotix/Corbis

Is tongue splitting some flavor-of-the-month extreme fashion style designed to make parents the world over weep in shame? Or is this particular form of body modification as old as the forests themselves, as natural to human culture as farming and backgammon? From what we could gather, the history of tongue splitting is a little bit of both, though hopefully without the weeping parents (be nice to your elders, kids!).

First off, the image of a human, humanoid or creature with a forked tongue does indeed date back to early mythology. Whether supernatural beings or some gnarly human-lizard hybrid, creatures portrayed with forked tongues have generally been associated with evil -- or at least kind of shady -- character traits. A prime example would be Judeo-Christian depictions of Satan, who is often described as having a forked tongue. Why the negative portrayal? Perhaps because of their association to lizards and reptiles and our natural fear of such "monsters," but really that's just speculation [source: Pitts-Taylor].

The most concrete records we have of split tongues in history are accounts of yogis practicing Khechari Mudra, who would halve their tongues for meditation purposes. Once their tongues were split, the yogis would stretch -- or "milk" -- the two ends until they were long enough to curl back in the mouth and close the nasal passage. Doing so was said to harness energy and bring about a particularly pleasant state of euphoria and sense of physical disembodiment. But despite some written accounts, there isn't a tremendous amount of evidence for this practice [sources: Nayaswami; Singh; Pitts-Taylor].

We don't really get to the provable stuff until the mid-'90s, when a small handful of body modifiers decided to try something a little new. The first documented procedure was performed in Italy around 1994, but it wasn't until two body modification luminaries -- Dustin Allor and Erik Sprague (aka "The Lizardman") -- had the procedure done a few years later that tongue splitting began to attract attention. Then, right around the turn of the 21st century, the trend took off in earnest and has become increasingly common [sources: Sprague; Medical Bag; Vaughn].

So now that we know a little about the history, here's the question: Who's performing the procedures -- and what does the law have to say about all this?