Can a full coat of body paint kill you? 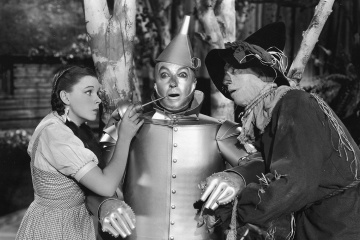 Getting oiled was the least of the original Tin Man actor Buddy Ebsen's worries. Jack Haley, pictured here, took the role after Ebsen was hospitalized by a reaction to his body paint.
Todd Headington/iStock/Thinkstock

Walk around any comic convention and you'll see lots of body paint. Cosplayers (people who participate in "costume play") commonly dress up as their favorite characters -- and if that means painting their skin to take on the role, so be it. Body painting is also featured in fashion magazines and art projects. Sometimes certain parts of the body are painted, but sometimes the subject wears paint from head to toe.

You might wonder if covering your entire body -- including your face -- in paint is dangerous.

Although a typically safe endeavor, a full coat of body paint can be bad for your health if you're not careful. You can develop heatstroke from full-body paint, since the paint covers your pores and prevents the sweating and cooling mechanisms in your body from working correctly. Also, you must use paint meant for the skin. Acrylic paint, for example, is meant for canvas only -- and for good reason. Acrylic paints may contain ammonia, formaldehyde and heavy metals, all of which are dangerous if ingested [source: Princeton University].

A well-known example of body paint gone wrong is the story of Buddy Ebsen, the first Tin Man in the film "The Wizard of Oz." Production artists used white clown makeup that they covered with aluminum dust to get the "tin" look for his role. Two weeks later, Ebsen was in the hospital, nearly unable to breathe, his skin tinged blue. Doctors discovered his lungs were coated with aluminum dust. Due to his hospitalization, another actor, Jack Haley, took over the role. This time, the aluminum powder was mixed into the paint instead of brushed on, and he suffered no ill effects save for a severe infection when the makeup got in his eye [source: Harmetz].

Another common fear about body paint is whether a head-to-toe coat can cause a person to suffocate. This likely comes from the James Bond movie "Goldfinger." In the 1964 film, the villain Goldfinger kills character Jill Masterson (played by Shirley Eaton) by covering her in gold paint, causing her death by suffocation. An urban legend spread that Eaton actually died on set from asphyxiation from the same gold paint. However, this is physically impossible, and as of March 2015, Eaton is alive and well. We don't breathe through our skin -- we breathe through our noses and mouths. Therefore, covering your entire body in paint won't cause you to suffocate, no matter what Goldfinger does.

Using paints specifically designed for body use dramatically lessens any health risk, but always test a small patch of skin before covering your entire body with paint, in case you're allergic to some compound in the paint.