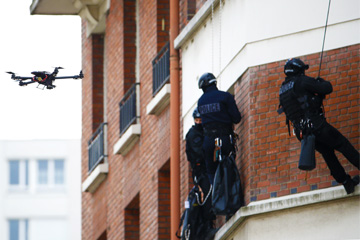 A French police intervention unit takes position outside a Paris apartment while a drone flies outside windows.
Thomas Samson/Getty Images

Technology and law enforcement have always been uneasy friends. As a society, we generally want our cops to have all of the tools they need to keep the bad guys at bay. We just want them to use those tools responsibly and without sticking their beaks into ordinary, generally law-abiding citizens' everyday life. Whether it's using infrared heat sensors to detect marijuana grow houses, global positioning system (GPS) tracking devices to tail suspects or breathalyzers to calculate how much a driver has had to drink, advances in technology usually mean new ways to make cops more effective. In the U.S., they also raise fresh questions about where police work stops and invasion of privacy begins.

Drones are the latest new toy for cops to pose the policing versus privacy issue. Unmanned aerial vehicles (UAVs) offer law enforcement agencies a bird's eye view of crime and disaster scenes that they may not otherwise be able to get. The rise of the machines also has privacy hawks concerned about how drones may pull back the curtain on intimate details of our daily lives [source: Mitchell].

One of the most significant benefits of unmanned aerial vehicles is their ability to easily get to places where it would be costly or dangerous for us humans to go. That includes not only high in the air above buildings and trees, but also into active natural disaster areas and ongoing crime scenes. Strap a camera and other technology onto one of those bad boys, and police and search and rescue teams can get a bird's eye view of the situation without having to rent a helicopter or put themselves at risk [source: Mitchell].

Police in Mesa County, Colorado, where the sheriff's department was one of the first in the United States to get federal approval to use drones, originally intended to employ the flying vehicles in searches for lost hikers. At least one of the department's drones is designed to fly back and forth in a grid pattern, doing overhead what rescuers are doing on foot. They've also used drones to recreate crimes scenes by shooting aerial photos that are turned into a three-dimensional model of the area. Law enforcement agencies in Michigan and Illinois are similarly using drones to respond to emergencies and document crash sites and other crime scenes [sources: Greene, Greenwood, Chicago Tribune].

The aerial views that drones capture also make them an attractive tool for surveillance tasks, whether it's tailing a person of interest in a criminal case or peeking into his or her car or home. That's were things get a little tricky. Typically, cops need a warrant or some sort of "exigent circumstances" to search a home and "probable cause" to get inside a car. Those requirements don't apply to scanning for objects that are in plain view, however, raising the question of whether Johnny Law can fly a drone outside a person's home or vehicle and snap photos or videos through doors and windows. If used in concert with advanced technology like facial recognition software, infrared capabilities and high-powered audio recording devices, drones could be used as a highly-attentive fly on the wall, according to privacy advocates [sources: Mitchell, ACLU].

There is little federal law on the books dealing directly with drones. Although police outfits have to get approval from the Federal Aviation Administration (FAA) to use the flying machines, the FAA is concerned generally with public safety, rather than privacy issues. That leaves limits on drone use largely a state-by-state matter, with some leaving the skies open for business and other opting to ban UAVs altogether [sources: Mitchell, ACLU].