by Dave Roos
Next
The @ sign originally was a unit of weight. atakan/Getty Images

In Germany, the @ symbol is called a Klam­mer­affe ("spider monkey"). In Israel, it's called a strudel after the roll-shaped pastry. In Hungary, Norway and Turkey, it's called the kukac ("worm"), grise­hale ("pig's tail") and gül ("rose"), respectively.

In English, we've ignored the fun, curlicue shape of @ and gone with the decidedly less colorful "at sign." But if you're really interested in the long and fascinating history of the now-ubiquitous @, it's better to call it by its Spanish name, arroba.

If you travel to a Spanish-speaking country today and visit the local food market, you might come across a different meaning of arroba that predates email addresses and Twitter handles by half a millennium.

In Ecuador or Bolivia, for example, a large quantity of potatoes is often sold by the arroba with one arroba equaling a little less than a bushel (60 pounds or 27.2 kilograms). An arroba of oil, meanwhile, measures more than 3 gallons (11.3 liters), while an arroba of wine is over 4 gallons (15.1 liters).

But what's the connection between arroba the weight/measure and arroba the @ on your keyboard?

For the answer, we turned to Keith Houston, author of "Shady Characters: The Secret Life of Punctuation, Symbols and Other Typographical Marks" and his exhaustive, two-part history of the @ symbol.

Greeks, Romans and Moors — Oh My!

As Houston explains, the Greeks and Romans used to trade commodities like wine, oil and olives stored in long-necked ceramic jars called amphorae. For these ancient Mediterranean merchants, an amphora was not only a convenient storage vessel, but a standard measurement — one amphora equaled a volume of one cubic foot or roughly 7 gallons (26.5 liters).

Meanwhile, Spanish and Portuguese traders used a similar method to set a standard weight and volume for casks of different commodities. They didn't use the word amphora, but rather arroba, which they borrowed from the Arabic-speaking Moors who ruled the Iberian peninsula from 711 to 1492 C.E. The Arabic al rub means "one-fourth," and an arroba in ancient Spain and Portugal was a "quarter of a quintal," writes Houston, which was around 4 gallons (15.1 liters) or 25 pounds (11.3 kilograms).

There's a reason Houston spends so much time talking about ancient pottery and Medieval weights and measures. That's how an Italian historian discovered what may be the first identifiable use of the @ symbol in recorded history.

In the year 2000, Giorgio Stabile, a professor of the history of science at La Sapienza University in Rome, stumbled on a letter dating from 1536 that appears to use the @ sign as shorthand for amphorae. The author, an Italian trader named Francesco Lapi, wrote that in Seville, Spain "an amphora of wine, which is one-thirtieth of a barrel, is worth 70 or 80 ducats."

But instead of writing out the word "amphora," Lapi used the @ symbol.

"Until now no one knew that the @ sign derived from this symbol, which was developed by Italian traders in a mercantile script they created between the Middle Ages and the Renaissance," Stabile told The Guardian in 2000. "The loop around the 'a' is typical of that merchant script."

When Stabile looked at Spanish-Latin dictionaries from the 16th century, he found that arroba was synonymous with amphora. So, it's very likely that Spanish traders would have adopted the same @ symbol to stand for arroba, making the Spanish name for the @ sign one of the oldest and truest we have.

How @ Got On Your Keyboard

In more modern usage, Houston says that the @ symbol became shorthand for "at the rate of." A factory ordering supplies might invoice for "100 tons of steel wire @ $50/ton," for example, or a neighborhood grocer would advertise a daily special for "bratwurst @ $.30/lb."

Even though @ was widely used in business and commerce by the 19th century, the symbol wasn't included in the earliest mechanical typewriters. Houston points out that the very first typewriter made by American inventor Christopher Latham Sholes in 1868 only had enough keys for the numbers two through nine. The capital letters "O" and "I" substituted for zero and one.

Just like the $ sign, the business-friendly @ made its way onto typewriter keyboards by the end of the 19th century. But it would take another 50 years for the @ symbol to be invited to the nascent computing party.

Houston writes that in the 1950s, the @ sign was added to something called the Binary Coded Decimal Interchange Code (BCDIC), a collection of 48 characters printed on early computing punch cards. And in 1961, IBM cemented the @ symbol's place in computing by including the character in the programming code for its room-sized "Stretch" supercomputer, the fastest computer of its day.

There's a good chance the @ sign would still be an obscure keyboard character if not for the actions of a humble engineer named Ray Tomlinson back in 1971.

Tomlinson was working for a private defense contractor helping the U.S. government's Advanced Research Projects Agency build what would become the world's first internet, known as ARPANET. Tomlinson's job was to write programs that would run on this new network connecting a whopping 19 (!) different machines in 1971.

Electronic mail already existed in a primitive form at the time. Messages could be saved by a user and opened up later by a different user on the same machine. But Tomlinson, as a side project, wanted to see if messages could be sent from one machine to another over ARPANET.

There was a problem, though. How would Tomlinson direct messages to different users on the same remote computer? He needed a symbol that would serve as the address. Looking down at his teletype terminal, Tomlinson saw the humble @ symbol sitting atop the letter "P."

According to Houston, Tomlinson chose the @ symbol for a number of practical reasons. First, it was already common shorthand for "at the rate of" so it made sense as "user 'at' host computer." Second, it was obscure enough that it wouldn't have been used in any existing host computer names. And third, because the @ wasn't already a command on his company's programming system.

Tomlinson wrote up the experimental email program and sent a test message to himself from his brand-new email address: tomlinson@bbn-tenexa. What did the world's first email say? Tomlinson has zero recollection, but guesses it was something appropriately momentous like "testing 1 2 3 4" or "QWER­TY­UIOP."

HowStuffWorks earns a small affiliate commission when you purchase through links on our site.

According to the BBC, there's a Bulgarian document in the Vatican Apostolic Library dating from 1345 AD in which the "A" in "Amen" is substituted with an @. No explanation why. 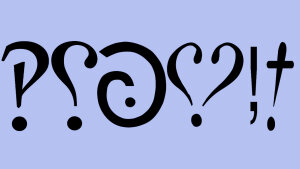 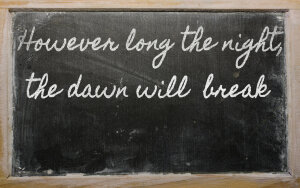 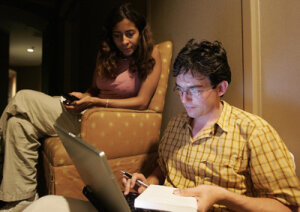