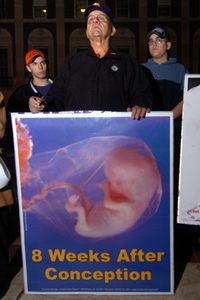 An anti-abortion protestor showing the development of a fetus at 8 weeks.
Associated Press/Steve Miller

Some anti-abortion groups cite post-abortion syndrome as one reason why abortion should be outlawed; these groups claim that the procedure harms women mentally and emotionally. This argument is slightly different from the argument that most of these groups make, which revolve around the rights of the fetus. It may be a response to groups that support abortion rights, which often frame their argument as an issue of women's rights.

In essence, the issue of fetal rights versus a woman's rights sum up the current argument about whether abortion should be legal. The key question that doctors, lawyers, philosophers and theologians have spent much time debating is at what point a fetus becomes a human being, and at what point that fetus is entitled to the legal rights that a fully developed and grown person is.

International polls show that there are many different beliefs about when human life begins. Some people believe that life begins at the moment of conception, when the male's sperm fertilizes the female's egg. Others say that life begins when that fertilized embryo is implanted in the womb, while the highest percentage of people in a 2008 poll claimed that life didn't begin until a fetal heartbeat could be detected [source: Coghlan].

Historically, abortion was deemed acceptable and legal until the woman felt the "quickening," or the first movements of the fetus. At that point, most believed, the fetus was a person with rights. This may also be discussed in terms of the "viability" of the fetus, or a measure of whether the fetus could conceivably survive outside the womb. Some look for markers that the baby is attaining the means for consciousness. For example, some anti-abortion groups believe that a woman should be told that an abortion will cause the baby pain. The understanding that a being is capable of pain is in some ways a recognition that the fetus is cognizant and aware of its surroundings, and thus in some ways conscious. While there's a lack of consensus about when a fetus feels pain, many researchers believe that it's unlikely until the 28th week of gestation [source: Tanner].

In ancient Greece and Rome, abortion was considered a reasonable method of family planning; it was even endorsed by Aristotle because he believed the fetus lacked a soul. However, as time went on, the practice became shaped by cultural shifts, particularly influenced by religious viewpoints on the practice. For example, the intent of a woman seeking an abortion was questioned, because many found the practice more tolerable when done to save the mother's life or in the case of rape or incest. However, while Aristotle once believed abortion could be a family planning tool, many today believe that abortion is the equivalent of murder. On the next page, we'll explore how this changing worldview has affected the legality of abortion.