by the Editors of Publications International, Ltd.
Next 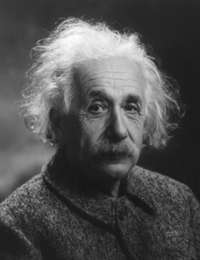 Albert Einstein was one of the most creative minds in science.

Take a look at what some famous folks throughout history have said about creativity.

1. "The chief enemy of creativity is good taste."

2. "The secret to creativity is knowing how to hide your sources."

3. "Creativity is allowing yourself to make mistakes. Art is knowing which ones to keep."

4. "Creativity is the sudden cessation of stupidity."

5. "Necessity is the mother of invention, it is true, but its father is creativity, and knowledge is the midwife."

6. "The whole difference between construction and creation is this: that a thing constructed can only be loved after it is constructed; but a thing created is loved before it exists."

9. "Our current obsession with creativity is the result of our continued striving for immortality in an era when most people no longer believe in an afterlife."

11. "The art of creation is older than the art of killing."

12. "Human salvation lies in the hands of the creatively maladjusted."

13. "The life of the creative man is led, directed and controlled by boredom. Avoiding boredom is one of our most important purposes."

14. "No matter how old you get, if you can keep the desire to be creative, you're keeping the man-child alive."

15. "A hunch is creativity trying to tell you something."

17. "Creative minds always have been known to survive any kind of bad training."