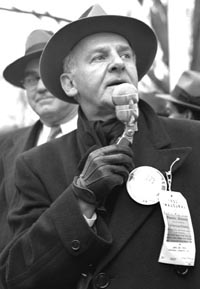 Walter Winchell was not only the forefather of gossip columnists, but he also dished the dirt with such style and wit that even the libel attorneys couldn't touch him. He did so by making up his own words and by delivering his scoops at an average of 197 words per minute! Here are just a few terms from the American vernacular created by Winchell.

This means to make a quick getaway. Here's an example of how underworld mobster speak was brought to the mainstream, thanks to Winchell's column.

This is slang for an FBI agent. The G stands for government.

Mobster Dutch Schultz wasn't too pleased when Winchell wrote about his personal liaisons with blonde women, describing Schultz as a "pushover" for fair-haired beauties.

Do you give up? This is how Winchell referred to people who were falling in love!

Not to be confused with falling in love, these were Winchell's code words for making love. Although "Making Whoopee" was a 1928 song written by Gus Kahn, it is believed that Winchell used the term first.

It stands to reason, at least in some cases, that those who have "Garboed it" or have been "making whoopee" for a while would likely get married. These are the interesting terms that Winchell had for that sacred event.

baby. He had three children, so he "infanticipated" a few times, too.

8. Reno-vated; Tell It to a Judge; Curdled

In 1929, a divorce was granted in America every two minutes. So it's only natural that Winchell would eventually coin a phrase for that phase in life as well.

Maybe there were so many divorces because husbands had mistresses! This is what Winchell called the women who waited for their married lovers to call.

The next time you watch the ball drop in Times Square on New Year's Eve ponder this: Winchell used to call this famous block "Orange Juice Gulch." Vendors such as Orange Julius and Nedick's (a hot dog and orange drink joint) populated the area in Winchell's day. Had he been in the biz a generation later when strip clubs littered the Square, surely he would've coined a more colorful phrase!

You've heard the phrase "a New York minute" used to imply a very short period of time. Winchell edited the phrase to include the beat of New York, implying a more frenzied pace.

A horse? A ballpoint pen? A lighter? Nope, it's a movie!

Stay away from this crowd. These are the bad guys.

These are the worst "pink stinkos" of all. This was Winchell's term for the Nazis. Much to the dismay of his network and sponsors, Winchell would not allow censorship! He simply coined his own phrases in order to discuss Adolf Hitler and his "swastinkas."