Why 'Wednesday' Isn't Pronounced the Way It's Spelled

Browse the article Why 'Wednesday' Isn't Pronounced the Way It's Spelled 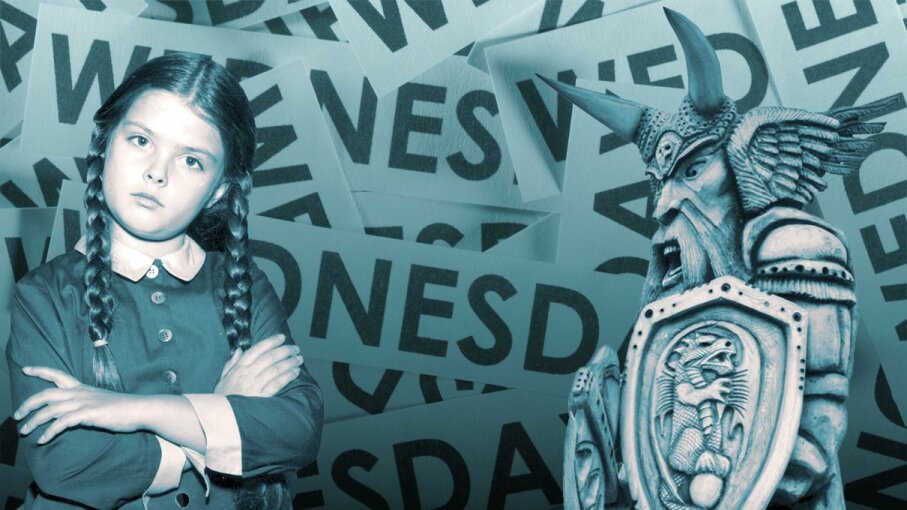 What's in a name? Wednesday Addams may owe a debt to the Germanic god Wodan. Michael Wheatley/ABC Photo Archives/Getty

Most Americans don't pronounce the first "d" in Wednesday. But there it is, sitting pretty. So what gives?

Well, that's a question for the ages. The Middle Ages, to be exact.

The medieval period, also called the Middle Ages, is a period in European history that stretches from the fifth to the 15th century C.E. It's also a time that had great influence over the dialects that would eventually form our modern English language.

American English is rooted in ancient European languages. As far back as the fifth century, several related Germanic dialects were introduced to Anglo-Saxon realms in what is now Scotland. As people interacted, languages fused and a dialect known as Old English emerged. This "borrowed" language, which sprung from many roots, continued to transform over the centuries. It later took on the influence of Romance languages, which sprung from Latin, as well as a version of the French language spoken by Viking raiders who conquered areas of England. By the 11th century, this new variety of English became known as Middle English.

Even now, language continues to change and adapt because of the influences of a variety of cultures and developments. The Merriam-Webster Collegiate dictionary, for instance, recently upped its content count by more than 1,000 words, adding specimens like binge-watch, photobomb and truther.

The word "Wednesday" has adapted over time, too. Its origin lies in Old English's Germanic languages, where it emanated from the word "Wōdnesdæg." Throughout Old English and Middle English, it remained an homage to the Anglo-Saxon god Wōden and the Germanic god Wodan. (You may be more familiar with the Norse equivalent Odin, recently prominently featured in the movie adaptations of Marvel's "Thor" comics.)

Wodan was a powerful god, one who created the human race. He also represented poetry and the arts, but instigated battles and wars. He can be compared in some aspects with the ancient Roman deity Mercury, who was a messenger to the gods. Wodan and Mercury, although quite different, were both linked to the day of the week we know as Wednesday.

As Wōdnesdæg moved from Old English to Middle English, its spelling changed. It became "Wednesdei" and the "d" remained, even as the word morphed into "Wednesday."

Wednesday is just one example of words — like February and ptarmigan — where letters appear in a word's spelling but not in its pronunciation. The curious case of America's silent "d" doesn't extend to parts of England, Scotland and India, where many people enunciate the letter. (Though some don't. Language is tricky!)

While there's no moment that can pinpoint the fading away of Wednesday's "d" in spoken American English, and no reason why — though an oceanic divide seems to have spurred language's evolution — the erosion of a pronounced letter over time isn't all that uncommon. Phonologically speaking, when that happens to a letter on the interior of a word, it's called syncope. You may be familiar with syncope as a poetic device — going "o'er" a river instead of "over." And you may not even notice it in some common words that would sound odd with every letter enunciated. Chocolate has a central "o" that's not fully pronounced, and Christmas sounds more like a celebration of someone called Chris, though it celebrates a figure known as the Christ.

Want to learn more about how language changes? Check out this What the Stuff?! video:

Now That's Interesting
The Germanic god Wodan is, to a certain degree, an analog to the ancient Roman god Mercury, which is why Wednesday in Romance languages is Mercredi (French), Mercoledì (Italian) and Miércoles (Spanish).