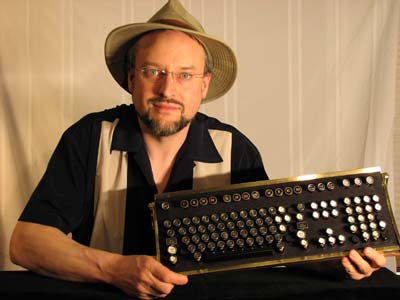 The typical steampunk artist is also part inventor, part engineer and part mad scientist. Many describe themselves as gadgeteers or tinkerers. Steampunk art has a very industrial appearance. Some feel that the use of materials like metal and wood make objects appear more permanent than technology made out of plastic and other modern materials.

Many steampunk artists are self-taught and work out of basements or garages. Most treat their art as a hobby. The amount of time and effort that goes into creating a single piece of steampunk art makes it difficult to make a living from selling art alone. Some are happy to share their design and building processes, even including step-by-step instructions so that others can create similar pieces.

Steampunk artists regularly use certain materials to achieve an antiquated appearance. The most common materials in steampunk art and design include:

There aren't any stores that sell steampunk gadget kits, so most artists have to do a lot of legwork to find materials for their projects. Many scour arts and crafts shops, pawnshops, thrift stores, flea markets and antiques shops for parts. Some regularly search the Internet, particularly eBay, for material.

As for tools, every artist has his or her own favorites. For many artists, the most important tool is a drafting table or similar design space. The most intricate pieces of steampunk art require a lot of forethought in the design process. For this reason, most steampunk artists own traditional drafting tools like compasses, protractors, rulers, drafting triangles and T-squares. By drafting meticulous designs, artists can avoid problems when they're in the building phase of the­ process.

Other common tools include:

Some of these artists have created designs that turn mundane devices into gadgets that look simultaneously atiquated and high-tech. Pieces of steampunk art can be pretty expensive, but there are ways to commission a less expensive piece. One cost-cutting technique artists sometimes use is to spray metallic paint on their creations to achieve the desired look. A can of copper metallic finish might cost one-tenth as much as a sheet of copper.

On the next page, we'll look at some steampunk modifications, also known as mods.

The earliest recorded use of the term "steampunk" is in a 1987 letter from writer K. W. Jeter to Locus magazine. Jeter suggested using the term "steam-punks" to describe authors writing speculative fiction set mainly in the Victorian era [source: Science Fiction Citations]. Some people prefer to use other terms to describe the steampunk aesthetic, like retro-futurism or neo-Victorianism.