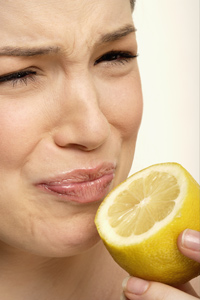 You won't have to pucker up to a lemon if you've had miraculin.
Gen Nishino/Riser/Getty Images

Miracle fruit is formally known as Synsepalum dulcificum. It's a red berry that's native to West Africa. The fruit was first described in 1725, when French explorer Chevalier des Marchais observed villagers in West Africa consuming the berry before a meal of sour palm wine and gruel [source: Slater]. It was brought to the United States in the 1960s by a botanist with the U.S. Department of Agriculture.

In 1968, scientists isolated the active protein responsible for making things taste sweet. Because of its miraculous way of making things taste so good, the protein was dubbed miraculin. When miracle fruit is consumed, the miraculin in the berry binds to the taste buds on the tongue. A person has receptors on their taste buds that identify sweet, sour, bitter and savory tastes. Normally, if you were to eat a lemon, your sour receptors would start firing. You can learn more about what happens in How Taste Works. Under the influence of miraculin, however, the sweet receptors start signaling and suppress the sour tastes. The miraculin rewires the sweet receptors to temporarily identify acids as sugars.

When the berry is consumed, it may not taste like much; it's been compared to a less flavorful cranberry [source: Farrell, Bracken]. Much of the berry is a bitter seed, but the little pulp that's there packs a big punch. To get the full effect, the berry's pulp should be held in the mouth for a minute and spread all over the tongue.

Then, for about an hour, the miraculin modifies sour foods to taste sweet. Sweet foods will taste about the same, if not overly sweet, and other flavors remain unaffected. Because miraculin is a protein, heat will destroy the effect, so the berry can't be cooked, and heated foods won't taste any differently. Eventually, saliva washes away the miraculin, and your tongue returns to normal.

Is your tongue tantalized by the thought of a natural and sugar-free sweetener? Turn the page to find out what applications this miraculous protein might have, and why you might not have heard of it until now.