The Bikini Makes Its Debut in Paris 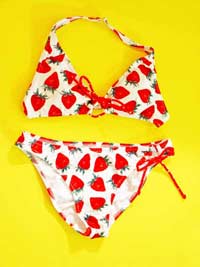 When it first debuted, the bikini was considered scandalous.
Image courtesy Stock.xchng

It may not have been polka dotted, but when the bikini debuted at a poolside fashion show on July 5, 1946, it was the itsy-bitsy-teenie-weeniest piece of fashion the world had seen. Former mechanical engineer Louis Reard's creation even scandalized the models, who refused to wear it. He had to hire an exotic dancer named Micheline Bernardini to model it for him, and photos of her in the daring bathing suit made their way around the globe.

July 5 was the debut of the bikini in a fashion setting, two men really came up with the idea at the same time. One was simply more successful in promoting it. Jacques Heim was the first designer of the bikini, a tiny suit he called the "atome," as in the atom bomb. Reard named his "le bikini," four days after atomic testing began at the Bikini Atoll. Both men banked on the shocking design combined with the explosive name to launch their product. Both men claimed their suit was the tiniest in the world, and both were highly controversial. Reard won.

Why was the bikini so shocking? That might be easier to explain if you've ever heard of a bathing machine, a crucial part of beach life for 19th-century women. Think of it as a small shed on wheels. A woman changed inside the bathing machine, which was then wheeled into the water. Once in the water, she would dismount from a stepladder. Bathing suits then were basically just like regular clothes, which included shoes and hat. Eventually this outfit evolved into a bathing dress, which was basically a tunic over bloomers, often in a heavy fabric like flannel or wool. When wet, it probably weighed 20 or 30 pounds. Over time, the bloomers disappeared, arms were bared and hemlines rose. By the 1940s, two-piece bathing suits were considered acceptable fashion, partly because of World War II fabric restrictions. Movie stars like Rita Hayworth and Ava Gardner were often photographed in two-piece bathing suits.

So what was the big deal? Something very small, actually -- the navel. The Motion Picture Production Code of 1930, known as the Hays Code or Hays Production Code, prohibited stars from "indecent or undue exposure," and the navel was considered a no-no. Midriffs could be shown, but only the upper area -- apparently ribs don't possess the same sex appeal as the bellybutton.

Although the bikini became popular in France in the '40s, it didn't make a real splash in the United States until the '60s. Brigitte Bardot's turn in "…And God Created Woman" (1956) helped kick off the trend, while Annette Funicello movies like "Bikini Beach" (1964) and "How to Stuff a Wild Bikini" (1965) helped make the bikini more popular to the masses. Funicello's wholesome cuteness provided a certain sense of girl-next-door acceptability that steamy Raquel Welch in "One Million Years B.C." (1966) did not. The first Sports Illustrated swimsuit edition in 1964 sealed the deal with Babette March in a white bikini.

For lots more information about the bikini and related topics, check out the next page.