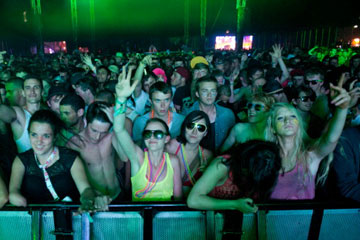 You step onto the dance floor, and the first thing you notice about the music is not only the shuffling tempo and the dark, minor-key feeling -- you can actually feel the music. The low end of the track is so bass-heavy, so consistently rumbling, that your body seems like it's vibrating. This isn't just your typical club experience -- this is dubstep.

Dubstep is a subcategory of electronic dance music, or EDM, an umbrella term for music made with computers and intended to be broadcast over nightclub sound systems. A lot of the music we listen to can play easily in many different types of environments, whether it's on a car stereo, an MP3 player or even tinny computer speakers. Dubstep, however, isn't a genre of music meant to emanate from iPod earbuds. Although lots of artists making dubstep music, including Skream, Kevin Martin and Burial, put out CDs and MP3s that you can listen to on a home stereo system, purists will tell you that the places to go hear and experience dubstep are at clubs and festivals -- spaces in which the speakers are configured specially for lots of low, seemingly never-ending bass notes.

The electronic music landscape is riddled with sub-genres, and while the uninitiated might not be able to tell dubstep apart from the rest of the EDM spectrum, its sound is marked by a few distinguishing traits. The genre was once limited to London nightclubs, the offspring of electronic music aficionados experimenting with pulsing basslines and stark, spare soundscapes. Today, the genre is the darling of record producers looking to infuse new sounds into hit singles and remixes, and its influence has spread to artists as diverse as Britney Spears, Snoop Dogg and Radiohead.

So, how do can you tell dubstep from other types of electronic music? What does it mean to "wobble," anyway?

The Breakdown: The Basics of Dubstep 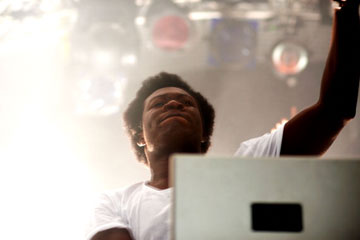 Although dubstep is a constantly evolving musical genre, there are some important structural elements that apply to many tracks.

Now that we know what to listen for in a dubstep song, let's find out how the sound was created.

The Intro: The Origins of Dubstep 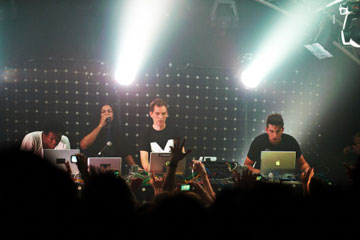 While the details of the genre are amorphous, most agree that dubstep first emerged in Croydon, a borough in South London, around 2002. Artists like Magnetic Man, El-B, Benga and others created some of the first dubstep records, gathering at the Big Apple Records shop to network and discuss the songs they had crafted with synthesizers, computers and audio production software. Their music tended drew on their stark urban surroundings for inspiration -- hence the often dark or spooky nature of dubstep. DJ Hatcha, a Big Apple Records employee and dubstep pioneer, began performing dubstep tunes at London's club Forward (which often reads as "FWD>>"), one of the earliest supporters of the genre. Ammunition Promotions, which ran the club, most likely coined the term "dubstep" in an XLR8R magazine story in 2002 [source: Clark].

The sound spread from there. DMZ Records, an early purveyor of dubstep music, organized club nights in the borough of Brixton. Online discussion forums centered around the new genre began to spring up. Dubstep songs became fixtures on Rinse FM and other pirate radio stations in England. The sound caught the ear of John Peel and Mary Anne Hobbs, who were DJs at the radio station BBC Radio 1. In January 2006, Hobbs broadcast a two-hour special entitled Dubstep Warz, which featured live sets from dubstep producers like Skream, Mala and others. An audio file of Dubstep Warz went viral, and the broadcast is now regarded an important moment in introducing dubstep to a mass audience.

Read on to learn how dubstep traveled across the pond and around the world. 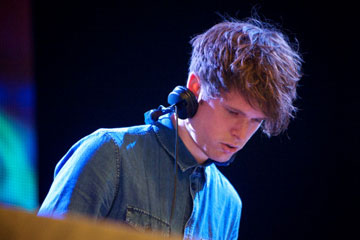 James Blake has made noise both in England and across the pond in the U.S.
Hayley Madden/Redfern/Getty Images

The arrival of dubstep to America traces back to Dave Q and Joe Nice, DJs who followed the electronic music scene in the United Kingdom. Smitten with the sound, the pair organized a dubstep-themed club night entitled Dub War at a Brooklyn bar in June 2005. The event's success spawned more festivals in other American cities, like Smog in Los Angeles, as well as events in Miami, San Francisco and elsewhere. With the low cost and easy accessbility of recording software available to aspiring dubstep producers, the genre spread to places like Japan, Australia and Brazil.

Mainstream record producers latched onto the sound, as well. In the latter half of the 2000s, R&B singer Rihanna, rappers Jay-Z and Kanye West, and the heavy metal group Korn all assimilated dubstep into songs. Even pop star Britney Spears incorporated the genre's tropes into two of her singles. Big-name music festivals like Bonnaroo, Coachella and Burning Man host dubstep performances. In 2011, two gatherings devoted to electronic dance music -- Electric Daisy Carnival in Las Vegas and Ultra Music Festival in Miami -- drew more than 380,000 attendees combined [source: Mason]. And in 2012, dubstep producer DJ Skrillex received three Grammy Awards, as well as a nomination for Best New Artist -- the first time a DJ was nominated for the category [source: Sinha-Roy]. And since the tempos sync up nicely with hip-hop tracks, it is not uncommon to see dubstep remixes of rap songs.

The entry of dubstep into the American mainstream spawned a sub-genre called "brostep." So named for the fraternity "bros" that embrace the sound, brostep embodies dubstep at its most aggressive: distorted bass lines playing at frequencies closer to mid-range, cartoonish or outlandish lyrics and themes, and tracks designed to whip live audiences into a dancing frenzy. Perhaps in response, a separate wing of avant garde artists has tailored moodier, more rhythmic types of dubstep less concerned with danceability. Another permutation sometimes called "lovestep" incorporates female vocals and tempos reminiscent of 1980s love ballads [source: Ricciardi]. Some musicians borrow elements from other niches of the electronic music world, while others borrow from wholly different genres, from classical to heavy metal to hip-hop. So, while dubstep has its own aural conventions, like any other genre of music, it isn't bound by them.

For lots more information on dubstep and other music genres, see the links on the next page.

What Is Einstein's 'God Letter'?
This One Guy Is Responsible for What We Think a Pirate Sounds Like
Sex Abuse in Catholic Church Blamed on Money, Power Dynamics