The East India Company and India 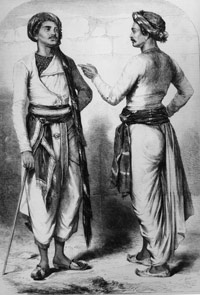 Perhaps it was being stationed halfway across the world from the East India Company's home offices in London. Or maybe it was the potential for wealth afforded by India's riches. Either way, Elihu Yale (the benefactor for whom Yale University is named) was tantalized into building his own smuggling operation. His dismissal from his post as the EIC governor of Madras was a light sentence compared to the fates of others who ran afoul of the company.

Perhaps Yale got away with his life because of the work he'd done on behalf of the EIC. Thanks to factories (colonies or settlements) run by men like Yale, the East India Company was able to subjugate India and its tribal rulers. The company built forts in India to house its private army. The EIC also raised soldiers from within the native populations. With the establishment of martial rule (the government set up in a land occupied by military) profits could be garnered easily. Perhaps the most profitable export for the company's India operations was opium.

By 1750, the EIC had established control over India's most prolific sites of opium cultivation. The British exported the opium to China, which eventually resulted in two opium wars between the countries over the drug's importation. By 1793, Britain had a monopoly on opium, and no Indian grower was allowed to sell his crops to any other company [source: PBS].

The British colonialism carried out through the EIC was pretty brutal. It included the forceful seizure of land and deposing of rulers. Tribute, taxes and loyalty were extracted from average citizens through methods up to and including torture [source: Emory University]. Ultimately, the British presence proved to be unacceptable for some Indians. A number of sepoys (native Indians who joined the EIC's militia) revolted against the EIC's rule during the Sepoy Rebellion of 1857. Some historians consider this India's first war for independence, even though it was quelled by the British army. Afterward, Great Britain officially occupied the country. India would remain an English colony until 1947, when it became a constitutional republic [source: CNN].