The East India Company and the United States 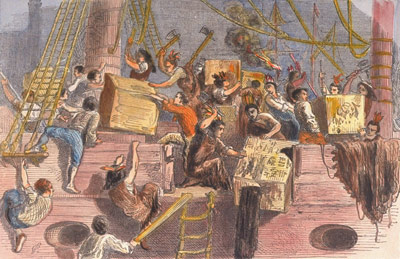 A depiction of the Boston Tea Party, a result of the Tea Act which favored the East India Company and punished competitors.
Life Pictures/Mansell/Time Life Pictures/Getty Images

American and British schoolchildren are taught about the infamous Tea Act of 1773, which led to the rebellious Boston Tea Party. But exactly why the Boston colonists threw thousands of pounds of tea into Boston Harbor may be less clear. It's actually due to collusion between the government and the East India Company.

The Tea Act was designed by Parliament specifically to help the EIC unload the millions of pounds of unsold tea in its English warehouses. The Americas were the designated recipients (like it or not) of the surplus tea. The act was meant to enforce the EIC's monopoly on tea in the colonies. It would be like the United States government forcing all of today's Americans to purchase Apple computers only. Ultimately, the Tea Act allowed the EIC to drive its competition out of business. Colonists deemed this an unfair practice -- government was supporting one business's interests at the expense of the liberty -- and it gave rise to the famous slogan "no taxation without representation" [source: Hartmann].

India ­also staged revolutions to buck the yoke of imperialism. Their efforts were focused on thwarting the East India Company and the British government. Read about India under EIC rule on the next page.