Browse the article 5 Large Nations With No Homeland 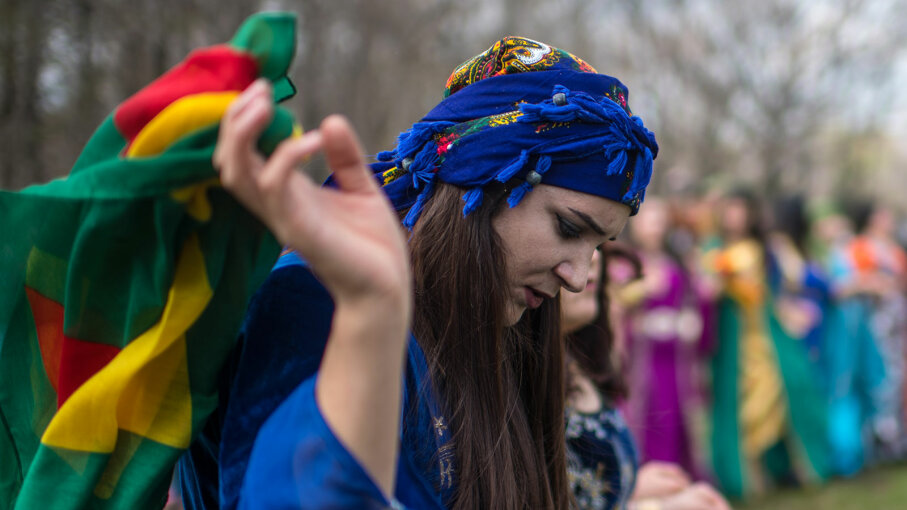 A Kurdish woman dances during Nowruz celebrations on March 24, 2018, in Tokyo, Japan. Nowruz, marking the first day of spring, is widely celebrated by Kurdish communities around the world. An estimated 2,000 Kurds live in Japan, many of whom are claiming refugee status owing to alleged human rights abuses in Turkey and Iraq. Carl Court/Getty Images

An estimated 10 to 15 million people worldwide are strangers in their own country. In many cases, they were born and raised in a country that denies them citizenship based on ethnic or religious discrimination. Since no government recognizes them, they can't get a birth certificate, attend school, see a doctor, own property or get married. In extreme cases, they are targets of violence and human trafficking.

These millions of stigmatized individuals worldwide are known as "stateless," defined by international law as "a person who is not considered as a national by any State under the operation of its law." Some stateless people are refugees, because they have fled their homeland to find refuge in another country, but not all refugees are stateless. Nor are most stateless people refugees.

The United Nations High Commissioner for Refugees (UNHCR) estimates that a third of all stateless people are children and more than 75 percent are members of a minority group. Because stateless people, like refugees, are vulnerable to serious human rights abuses, the UNHCR launched the #ibelong campaign in 2014 to eradicate statelessness in 10 years.

The Kurdish people are probably the best-known (and largest) stateless nation, but you've probably also heard of other stateless groups, like the persecuted Rohingya in Myanmar and the Palestinians. We visit five prominent stateless nations to find out how they got that way.

If Kurdistan were its own country, it would extend across 193,000 square miles (500,000 square kilometers) currently within the borders of southeastern Turkey, northern Iraq, northern Syria and northwestern Iran. But even though the Kurdish people have laid claim to this contiguous territory for centuries, they have no recognized nation of their own. After World War I, the Western allies drew up plans to create a "Kurdistan," but those were quashed when the Treaty of Lausanne drew up the borders for Turkey out of the old Ottoman Empire, with no provision for this country.

The Kurdish population has been estimated at between 20 and 40 million people who are united by language and customs, rather than religion (most are Muslim, though.) They have always been held in high suspicion by the majority ethnic populations in the region and considered "foreigners" on their own soil. In Iraq, 300,000 Kurds were stripped of their citizenship in 1980 for alleged disloyalty to Saddam Hussein. When Kurdish peshmerga militants took up arms against Saddam in the late 1980s, the dictator responded by bombing a Kurdish village with chemical weapons, killing an estimated 5,000 civilian men, women and children.

After Saddam was deposed, Iraqi Kurds negotiated the creation of a semi-autonomous region called the Kurdistan Regional Government (KRG), home to around 5 million Kurds. But it's still not their own country.

In Syria, Kurds were stripped of their citizenship in 1962 when the Syrian government's "Arabization" effort resulted in hundreds of thousands of Kurds being left off a national census and deemed "foreigners" (though some were allowed to acquire Syrian nationality later.) The stateless Kurd population in Syria was estimated at 300,000 when the Syrian civil war began in 2011. Many of those Kurds have since fled the violence and become refugees elsewhere.

The Kutupalong refugee camp in Bangladesh is the largest of its kind in the world, home to more than 600,000 Rohingya Muslim refugees from neighboring Myanmar (formerly Burma). By 2019, more than 730,000 Rohingya fled the Rakhine state in Myanmar to escape brutal persecution, including the raiding and burning of entire villages.

The United Nations called the Rohingya "the most persecuted minority in the world."

It's unclear how long the Rohingya have lived in Myanmar. Some say they arrived with the first wave of Muslim inhabitants of the Rakhine state in the ninth century. In addition to practicing Islam in a majority Buddhist country, the Rohingya speak their own language.

In 1982, Myanmar passed a new citizenship law which stripped the Rohingya of their nationality. Without legal rights as citizens, the Rohingya are subject to discriminatory and unjust policies that restrict their movement, confiscate their land and severely limit their access to health care, education and employment.

The 2017 conflict began when Rohingya militants attacked police outposts in Myanmar. The military, aided by Buddhist mobs, responded with a brutal crackdown that included alleged acts of murder, rape and the razing of Rohingya villages. The U.N. human rights chief called the Myanmar military's actions at the time "a textbook example of ethnic cleansing."

Palestinians aren't a homogenous ethnic or religious group like the Kurds and the Rohingya. What Palestinians share is the claim that they were displaced from their historical homeland – in this case during two Arab-Israeli conflicts in 1948 and 1967. In 1947, the United Nations decided to divide the country of Palestine (an area of about 2,400 square miles or 6,215 square kilometers) into a Jewish state (which became Israel) and an Arab state. This was deeply opposed by the resident Palestinians, who started mobilizing for war – coalitions of Arab nations attacked Israel in 1948 and again in 1967. The 1967 Six-Day War ended with Israel taking even more territory, including the West Bank and the Gaza Strip.

The U.N. Relief and Works Agency (UNRWA) was established in 1948 to aid Palestinian refugees who had lost their homes and livelihoods in the Arab-Israeli wars. A total of 5.5 million Palestinians are registered with the UNRWA and since Palestine is still not its own country, those 5.5 million are widely considered to be stateless. More than half live in Jordan, with a third living in the Gaza Strip and West Bank, and 15 percent in Syria and Lebanon.

Better known by the derogatory term "gypsies," the Romani or Roma people have suffered ethnic persecution in Europe for centuries. The first Roma migrated from Northern Indian between the 13th and 15th centuries, and the Romani language still shares many words in common with Hindi. (The term "gypsy" comes from the false belief that the Roma originated in Egypt.)

Because the Roma don't believe in the ownership of personal property, including homes, they have always lived on the fringes of European society, drawing suspicion as thieves, occult worshippers or worse. Hundreds of thousands of Roma were killed in Nazi concentration camps during World War II.

The Roma lived in relative peace in the former Yugoslavia, but when the communist country broke up in the 1990s, hundreds of thousands of Roma were displaced by armed conflicts in Balkan states like Bosnia-Herzegovina and Kosovo.

Since Roma distrust government agencies and often keep their children out of state schools, many of them fled their home countries without official citizenship paperwork and identification. This made it difficult to impossible for them to establish citizenship in their new countries like Macedonia, Montenegro and Italy.

Untold numbers of Roma remain stateless in the Balkans and mainland Europe. Some 10,000 to 20,000 live in Italy without Italian citizenship. In Macedonia, an estimated 110,000 to 200,000 more Roma struggle to find work, health care and housing without the necessary citizenship papers, even though Roma families have now lived there in exile for generations.

5. Hmong, Karen and Other Ethnic Minorities in Thailand

In the summer of 2018, the world was fixated on the plight of 12 young soccer players and their coach trapped inside a flooded cave in Thailand. Not all of the trapped players were Thai, though. Three of them, plus their coach, were stateless.

Thailand is home to an estimated 2 to 3.5 million stateless individuals. Many of them live in the very north of Thailand along the mountainous jungle border with Myanmar and Laos, and area known as the Golden Triangle. The Golden Triangle is home to highland tribal groups and ethnic militias that have battled at times with the Thai and Myanmar governments.

Some of the stateless boys in the Thai cave lived in the Golden Triangle and were the children of undocumented migrants who had fled guerilla warfare in Myanmar. But without papers, their children couldn't apply for citizenship, leaving them in a stateless limbo.

Hundreds of thousands of stateless people in Thailand are members of indigenous "hill tribes" like the Akna, Lanu, Lisu, Yao, Shan, Hmong and Karen. Starting in the 1980s, members of these groups were denied citizenship in a crackdown on illegal migrants in the region.

Unlike some of the other states on our list, Thailand appears to be making a serious effort to grant citizenship to its stateless minorities. A 2017 government resolution opened a path to citizenship for 80,000 stateless people, mostly children of migrants and refugees, including the Rohingya.

Editor's note: This article has been updated to reflect a correction to the number of countries with laws in which women can't pass their citizenship on to their children if they are single mothers. The correct number is 25, not 27 as originally stated.

Now That's Not Cool
According to the UNHCR, 25 countries have laws in which women can't pass their citizenship on to their children if they are single mothers.