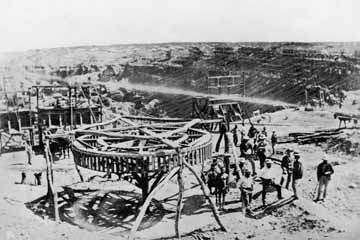 This Cape Town gold and diamond mine, pictured in 1867, would have featured brutal conditions and low pay.
Hulton Archive/Getty Images

When the Dutch set up camp in southern Africa in the 17th century, it was not to colonize [source: MSU]. The Dutch East India Company, rounding the Cape of Good Hope in 1652, came ashore to build a supply station for its trade ships along the spice route.

Regardless of initial intentions, Dutch settlement in southern Africa rather quickly proved disastrous for the native population. Europeans (including the French and the British, who quickly followed the Dutch, but in smaller numbers) brought with them the ideology of white supremacy that was common at the time. The Dutch settlers, for their part, also brought slaves, introducing to southern Africa the concept of white domination over people of "color" [source: MSU].

At the time of the Dutch arrival, the nation of South Africa didn't exist. The region was comprised of loosely connected chiefdoms, separate societies based on farming and ranching or hunter-gathering, inhabited primarily by black Africans [source: MSU]. Oppression of the native people began within years of the Dutch arrival: When negotiating for land and goods proved difficult, Dutch raiders entered native territories on horseback, answered resistance with gunfire, and ran the indigenous peoples off their land -- people who eventually had no choice but to become servants of the Dutch, working the land that was taken from them by force [source: UN].

This is the general process that led, over the course of about a century, to widespread white domination in southern Africa as Dutch colonists moved further and further inland. They were the primary colonizing force until about mid-1700s, when British activity in the region picked up. By the end of that century, when Britain laid claim to the colony, the region was inhabited primarily by a marginalized African majority and a ruling class of slave-holding whites.

A long struggle unfolded between the Dutch and the British, with Britain ultimately gaining control in the early 19th century. Southern Africa was now a British colony, and slavery was quickly outlawed -- at which point Dutch master-slave relations were replaced with master-servant laws that put white supremacy in the region "on the books" [sources: MSU, SADE].

Meanwhile, British rule was not well-received by the large Dutch population, who defiantly continued pushing further into the interior, conquering more territory, and destroying more tribes. What's more, the discovery of diamonds and gold in the 1860s led to rapid industrialization that pushed deep into the rural interior. An increasing number Africans were forced to abandon the agrarian lifestyles that had always fed their families to earn a living in the mines [source: South African History Online].

Conditions were brutal for African miners, and they would become something of a model for oppression going forward. Living quarters were segregated and under constant surveillance. Africans were placed in the most dangerous jobs, subjected to humiliations like cavity searches and passbook requirements, and were paid so much less than their white counterparts that their families only sunk deeper into poverty [source: Williamson].

Those pass requirements, whereby blacks had to carry identification documents at all times that indicated where they were and were not allowed to enter, would spread beyond the mines and become a key component of Apartheid control.

Throughout the 1800s, another conflict was escalating, too -- this one between the Dutch and the British. It culminated in war, which left the colony in far-off British hands but the Dutch still in secondary control on the ground.

The stage was set.