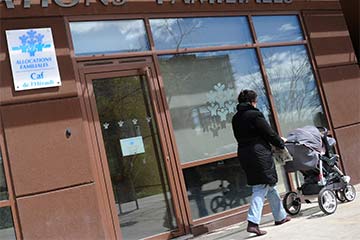 A woman walks with her child in a stroller by a Family Allowance Fund (FAF) office in France. The FAF gives cash assistance to families, particularly those with three or more children; it's one way France encourages childbearing.
PASCAL GUYOT/AFP/Getty Images

Some of the loudest critics of the zero population growth movement are critics of Paul Ehrlich himself.

"If I were a gambler," Ehrlich wrote in "The Population Bomb," "I would take even money that England will not exist in the year 2000." He made similar predictions about India, which would dissolve in a slew of food shortages, disease and riots [source: Chivers].

Something that Ehrlich failed to foresee was the "Green Revolution" in agriculture. While Ehrlich was making his doomsday predictions, an international consortium of plant scientists began breeding higher-yielding varieties of rice that would thrive in difficult growing conditions. These seeds, in combination with widespread use of chemical fertilizer and modern growing practices, led to vastly larger harvests in the developing world [source: IFPRI].

Critics of Ehrlich and the zero population growth movement use the example of the Green Revolution to assert that people – far from being "parasites" on the planet – are one of its greatest resources. People create and innovate, designing technologies and systems that have increased overall quality of life since 1968, even as the global population doubled.

Other critics of zero population growth believe that low birth rates are bad for the economy. If fewer people are born each year, then a nation's population gets progressively older on average. The fear is that fewer working-age people will result in less consumption of goods and services, slowing the economy. Also, without enough young working people, there won't be enough tax revenue to support social programs for the elderly.

Another criticism of the zero population growth movement is that countries with lower fertility rates actually do more damage to the environment. The two greatest producers of climate-changing greenhouse gasses are China and the United States, with relatively low fertility rates of 1.7 babies per woman and 1.9 babies per woman respectively [sources: UCS, World Bank]. Carbon emissions closely track per-capita income levels, not population growth rates.

As of 2015, population growth worldwide is slowing significantly.

More than 70 countries are now categorized as "low fertility" with rates of two babies per woman or less. Still, more than 60 "high-fertility" countries (i.e., more than three children per woman), mostly nations in Africa and Asia, are expected to make great economic gains over the coming decades [source: UN]. As these growing populations develop into global consumers, they will pose new threats to the environment.

When Paul Ehrlich founded Zero Population Growth, the belief was that world population would continue to grow exponentially, greatly outpacing our ability to feed ourselves. The modern population growth movement, led by groups like Population Connection, Population Institute and the Population Reference Bureau, place a greater emphasis on women's reproductive rights and improving access to family planning resources.

The critics may scoff at Ehrlich, but by dropping his "bomb" of wild predictions, he launched a movement whose very goal was to prove himself wrong.

Nearly 50 years later, it's easy to look back at Paul Ehrlich's dire predictions about population growth and scoff. Yes, England and India still exist, and the world has managed to feed itself – just barely in some places – while doubling in population since 1968. But Ehrlich's call to action, as overstated as it was, had its desired effect. The issue of population growth entered the national and international conversation. Today, the United Nations has a dedicated Population Division that monitors population trends as they relate to sustainable development worldwide. Ehrlich's original Zero Population Growth organization has spawned other global nonprofits dedicated to eradicating poverty, protecting the environment and promoting greater reproductive rights for women.