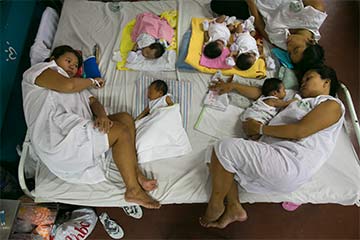 Mothers and their newborns share space on a bed after giving birth in the maternity ward at an overcrowded government hospital in the Philippines. Manila has a population of about 20 million people, and it rises by 250,000 every year.
Paula Bronstein/Getty Images

For Population Connection, the most effective solution to dangerous levels of population growth is to increase women's access to modern methods of contraception. According to statistics collected by the organization, there are 222 million women in the developing world who have an "unmet need for family planning" [source: Population Connection].

Population Connection defines this "unmet need" as women who are sexually active, fertile, and not using contraception, but who don't want a child in the next two years. Population Connection believes that simply by eliminating unintended pregnancies we could reduce population growth by 33 million unplanned births a year.

Improving access to contraception is only part of the solution to overpopulation. Education and family planning counseling is also key, especially in developing countries.

In Uganda, for example, a third of married women report an unmet need for family planning. Relatively few of these women – only 8 percent those surveyed – cited lack of access as their top reason for not using contraception. Instead, they expressed fears about side effects; confusion over the need for contraception after birth; opposition from their husbands and others; and a belief that you don't need to use contraception if you have sex infrequently [source: Megquier]. Similar results are reported for other countries in the developing world.

A woman's right to take control of her own fertility is closely tied to other human rights. Women who have access to better education, better health care, and better employment opportunities have fewer children on average than women who don't enjoy those same rights.