If You Love Your Phone So Much, Why Don't You Marry It?

Las Vegas sees a lot of weddings every year. On May 20, though, a slightly different type of wedding took place. Aaron Chervenak married his smartphone at the Little Vegas Chapel.

The newly married Chervenak didn't say what type of phone he married, but he did assign it a female gender, and he did give it a ring.

You can see the happy couple in this video from Kaspersky Lab, the cybersecurity firm that filmed the event.

Of course, the state of Nevada won't legally recognize the union, but Chervenak seems OK with that. He explains in the video that it's "a symbolic gesture to show us how precious our phones are becoming in our daily lives" that he hopes will inspire others to reconsider the depth of their smartphone dependencies.

For some folks though, publicly committing to an object like Chervenak did is a genuine expression of love and even attraction.

In the early 1970s, a Swedish woman named Eija-Ritta Eklof Berliner-Mauer coined the term "objectum-sexuality" to describe her attraction to inanimate things. Then in 1979, she married the Berlin Wall.

During a 2011 segment of the Swedish television show "100 Highlights" Berliner-Mauer told the hosts she all fancied a red fence in her yard and sleeps next to a scale model of her beloved Berlin Wall. The way Berliner-Mauer sees it, all things are living and contain a soul, thus laying the foundation for potential relationships.

Nor is Ms. Berliner-Mauer alone in her unique passion. Watch the video above to learn more about some of Berliner-Mauer's fellow objectophiles.

Could the Popularity of 'Finding Dory' Hurt the Blue Tang Fish? 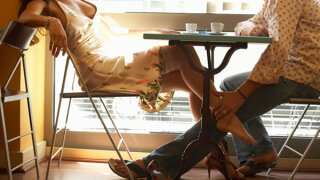 The Look of Love: Top 5 Physical Signs of Attraction

Exploring the World of Mail-order Marriages