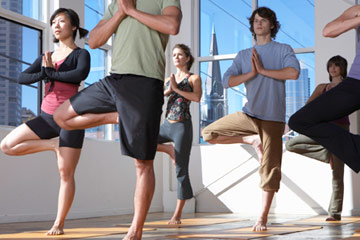 Ask about the type of yoga an instructor will be teaching before taking the class.
Thomas Northcut/Riser/Getty Images

As we mentioned, hatha yoga, or yoga based on physical postures, is the most common type of yoga in the United States. But many types of yoga fall under the hatha yoga banner, so it's important to investigate what type of class you might be getting at a studio or gym.

People who want an aerobic-type workout tend to be drawn to ashtanga and power yoga. With these styles of yoga, you flow quickly from one pose to the next. You'll probably work up a sweat with ashtanga or power yoga, but if you'll definitely perspire if you choose to practice Bikram yoga or hot yoga. In a Bikram class, you'll perform 26 postures twice in a room that's upwards of 100 degrees Fahrenheit (37.7 degrees Celsius). The high temperatures are supposed to make your body more flexible and speed the removal of toxins from the body.

There are plenty of yoga options if you'd like to take things a little easier, though. One popular style is Iyengar yoga, which uses many of the same postures as ashtanga yoga. However, the positions are held for a longer period of time, and there's a greater emphasis on alignment. You might use props like blocks, belts, chairs and blankets to go deeper into the pose.

Jivamukti yoga delves deeper into some of the spiritual elements of yoga. While a typical class will include ashtanga-style poses, it will also include meditation, chanting and spiritual readings. You can also expect to chant and meditate on mantras if you explore Kundalini yoga, which is aimed at waking up a coil of energy at the base of the spine. Ananda yoga involves performing poses while meditating on a specific affirmation for each one.

One particularly gentle style of yoga is viniyoga. A viniyoga class will move slowly through the poses, and instructors will tailor the practice to a student's individual needs and abilities. Integrative yoga therapy is also specialized; this type of yoga was designed for patients with conditions like depression, AIDS and heart disease and focuses on the mind's role in healing the body.

Integrative yoga therapy provides an example of how yoga can help someone who is sick, but plenty of yoga practitioners go to class for the health benefits they receive even when they're well. On the next page, we'll explore how yoga purports to protect the mind and the body.