The Year in Love, Relationships and Other Mushy Stuff

Browse the article The Year in Love, Relationships and Other Mushy Stuff 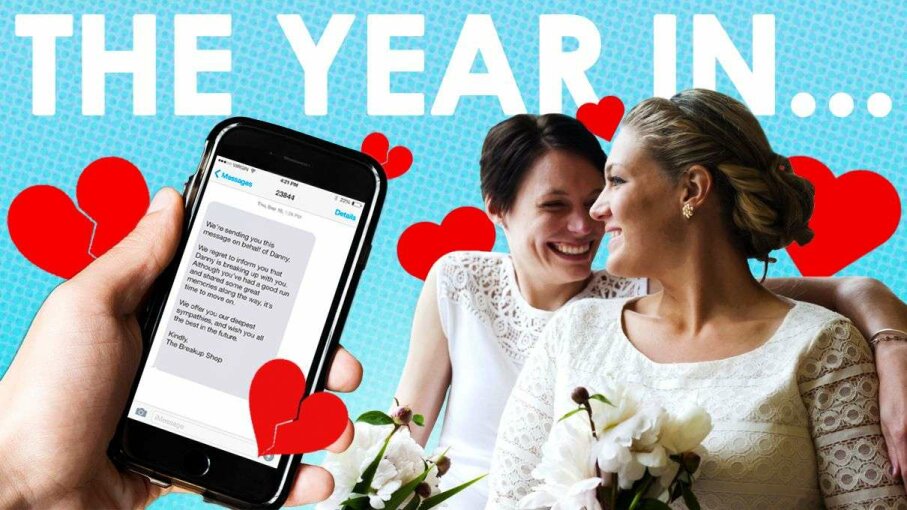 Did love conquer all in 2015? Molly Landreth/Getty Images (c) 2015 HowStuffWorks

In a world where headlines are often dominated by sadness and terror, love continues to fight the good fight, aided and abetted by everything from relationship-centric apps to groundbreaking marriage legislation. In the end, love conquers all, and the concept did not disappoint in 2015!

After decades of dogged litigation and awareness efforts, same-sex marriage was finally guaranteed as an inalienable right on United States soil. The landmark decision passed 5-to-4 on June 26, 2015, in a Supreme Court ruling amid a significant shift in public opinion on the topic in recent years. Following the decision, social media was flooded with the tag #Lovewins (tweeted 6.2 million times!) and rainbow profile pics in support of the gay and lesbian community's right to legally recognized unions.

A New York Times writer took matters into her own hands to excellent romantic results, which she wrote up in a much shared January piece for the paper. While casually hanging out with a man she'd had her eye on, they both decided to do a “love experiment,” using a series of 36 questions developed a couple decades ago by a psychologist named Arthur Aron.

The questions, which began simply enough, became more probing, and they ended the evening staring into each other's eyes silently for four minutes (another major part of the original experiment). Although she acknowledges that love might have happened anyway (they were both interested in each other), she concedes that the intimate questions didn't hurt matters, either.

The Death of Romance, Tinder-Style

Dating app Tinder is now doing in rapid fashion what our eyes (he's so not my type) and polite excuses (I'd like to go out, but I have to wash my hair that night) used to manage in face-to-face settings. Cute? Swipe right. Not so much? Left it is. A scientist even developed an artificial intelligence component that would learn a user's preferences so she wouldn't have to keep swiping left every time a bearded man appeared, for instance — they'd just get eliminated. Although the app is certainly helping people make connections, the glut of options presented to so many men and women is also changing the face of dating as we know it ... not always in a good way.

Remember when online dating was taboo and sorta embarrassing to talk about? Match.com does, but they're having the last laugh now! The site, which celebrated its 20th anniversary in April 2015, was on the front end of the online dating revolution. It hasn't lost its steam, either, and is still the most visited dating site by a significant margin. Now, you'd be hard-pressed to find someone who's single or has been in recent years who hasn't dabbled on the site. Happy anniversary, Match! Buy yourself something pretty to celebrate.

Kissing is to romance as apples are to pie, right? Well, that all depends on where you are and what type of culture you're immersed in. The prevailing thought until recently was that 90 percent of cultures enjoy the occasional smoochfest, but a study published July in American Anthropologist revealed that a mere 46 percent of the 168 cultures examined actually partake in romantic kissing. So, do your research before sidling up to a beauty in a foreign land, unless you take rejection well.

Does the Heart Really Want What It Wants?

Ever longed for a life-of-the-party mate, then wished fervently for someone less “in-your-face?” You're not alone. A University of Buffalo study found that people sometimes wind up feeling threatened by qualities they previously desired in a partner.

They also determined that psychological distance (being near or far in relation to the self) helps to influence attraction. So, what looks good from a few hundred miles away (long-distance relationship, anyone?) is less appealing in person, and vice versa.

Maybe this app can help ease the some of the issues we just mentioned with regard to long-distance relationships. Geographically challenged lovers are turning more and more to apps that help them maintain that lovin' feeling.

Couple is an app that's basically a social network for two – users can share pics, updates and chats of the naughty or nice variety in their own private universe — no matter where they are!

Wanna get your mom off your back about your romantic prospects? Trying to get that skeezy guy in your office to leave you alone? The “Invisible Boyfriend” (and “Invisible Girlfriend”) app is available to help you fake it till you make it. Billed as “a combination texting, voicemail and gift service that reinforces the appearance that you're seeing someone,” the app also helps users to fabricate background information about how you met, what he/she is like and how your romance has unfolded. You can even text your "boyfriend" and he'll text you right back, which can come in handy in any group setting. No sex, though. The makers haven't figured that one out, yet.

In a year where sexual and gender identity have made headlines repeatedly, Queery, offered a new take on dating. The online dating app recognizes the complex nature of gender and sexuality, and offers users customizable scales to more accurately represent to potential dates where they fall. This is particularly helpful to people who identify between the standard categories of male/female, gay/straight, preferring women or men, etc. Currently it's in the beta testing phase.

If the members of Cypress Hill weren't app users before, you can bet they are now! High There, an app that gained momentum in 2015, is the Tinder of the cannabis community, designed to connect pot lovers who want to be actual lovers. (You have 420 characters for introducing yourself. If that number means nothing to you, you're not the target audience.) As of July, the free app had 150,000 users ... now that's success to light up about! Not literally. Unless it's legal where you are.

The Appearance of Monogamy

Think you know a cheater when you see one? It turns out that you actually might! An August study published in PLOS ONE showed that men, when presented with many pairs of pictures of women (one with a history of faithfulness and another with the opposite) were able to ferret out the cheater 55 percent of the time, and a second group improved the stat to a 59 percent success rate.

Here's a sample of a text The Breakup Shop will send your former loved-one to let them know it's over. Kinda cold, huh?
Breakup Shop/HowStuffWorks
Now That’s Cool
#Love was Instagram’s top hashtag of 2015. Now that’s something to #Love.