Browse the article Why Xenophobia Thrives in Troubled Times 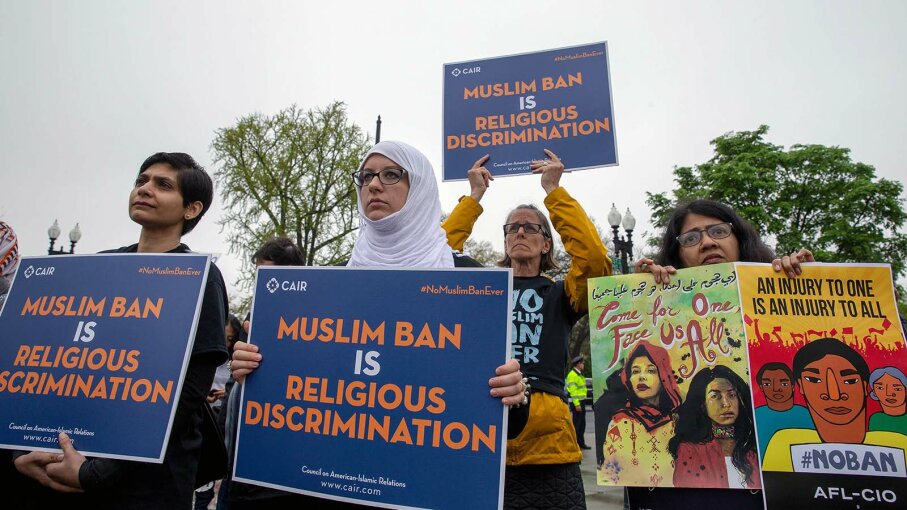 People gathered outside the Supreme Court in Washington, D.C. to protest the Muslim travel ban in April, 2018. Tasos Katopodis/Getty Images for MoveOn.org

In no period of American history — not in its founding or at the height of its most soaring successes, during none of its many wars or in the oft-spasmodic years in between — has xenophobia not been a problem. It is as much a part of this nation as its immigrant roots, as Abe Lincoln's stovepipe hat and Donald Trump's hair.

It's not always blatant. Xenophobia even appears, at times to be on the decline — say, after the signing of the Civil Rights Act of 1964. But often, too, it seems to spurt, with fury and venom, unapologetically from the mouths of common citizens and presidents alike.

It's a fact of American life, never easy to face, and never, ever pretty.

"To me, when I see it throughout history, I see it as changing, morphing, adapting, but not necessarily going away," says Erika Lee, a history professor and the director of the Immigration History Research Center at the University of Minnesota. "It's very common to be swept up in some of these moments. But when you look at it more carefully, especially in the long sea of history, we see more adaptation and shapeshifting, rather than we see sort of demise."

What Is Xenophobia, Exactly?

Lee, the author of "America for Americans: A History of Xenophobia in the United States," defines xenophobia by the book.

"An irrational fear and hatred of immigrants," she says.

The concept of xenophobia often is muddied with "-isms" like racism (Merriam-Webster: "a belief that race is the primary determinant of human traits and capacities and that racial differences produce an inherent superiority of a particular race") and nativism ("a policy of favoring native inhabitants as opposed to immigrants"). And, to be sure, xenophobia goes hand in hand with both. It's sometimes hard to tell them apart.

But it's probably best to keep the idea simple: Xenophobia is the fear and hatred, held by some people in a country, of those who are not from that country. It's a fear of immigrants, or just of people from other countries. Of foreigners. That fear could be because of skin color or culture or religion. It could be because of all of that. Or it could be something else.

Mainly, the hatred and fear are because those people are not from here.

That, of course, raises all sorts of questions, perhaps the biggest being, "Who exactly is from this country?" It's a riddle that's especially pertinent in the U.S., which bills itself as a nation of immigrants and is, supposedly — if not always factually — welcoming of them.

It's important to point out that xenophobia is alive and thriving in many parts of the globe. And it has been forever.

But because of America's reputation as a haven for immigrants the country has some answering to do when it comes to its deeply embedded history of xenophobia.

During World War II, the United States sent its own Japanese citizens to internment camps, like Manzanar Relocation Center in California seen here, purely out of fear.
Ansel Adams/Library of Congress

The History of Xenophobia in the U.S.

From the very beginning of the country, many who were there — even if they'd immigrated only recently — cast a squirrely eye on newcomers. From Lee's book:

Americans have been wary of almost every group of foreigners that has come to the United States: German immigrants in the eighteenth century; Irish and Chinese in the nineteenth century; Italians, Jews, Japanese, and Mexicans in the twentieth century; and Muslims today.

Historical accounts prove that every group that has immigrated to America has battled hatred, discrimination and worse from some already in the country. German and Irish Catholics in the mid-1800s were shunned — and even killed. During the Great Depression, 20 percent of the Mexican and Mexican American population was deported. (And more than half of them were American citizens by birth.) Japanese Americans were interned during World War II. Muslim Americans battle xenophobia today.

"We see this in the campaigns against Irish Catholics in the 19th century; 'Their drunkenness, they don't make good citizens because they're only going to vote the way of their Catholic priests,'" Lee says. "We see it in campaigns against Chinese immigrants ... 'They're cheap laborers, they take away jobs from deserving white Americans.'

"We could go on. 'Italians are also criminals. Mexicans are illegals and bandits. Muslims are terrorists.'"

Many of those groups, even long after they've carved out a place in American society, after generations, still grapple with xenophobia. It's at the crux of a uniquely American dichotomy, Lee says.

No country has allowed more immigrants to settle and more refugees a safe haven than America. Yet no country has deported more: Some 57 million since the late 1800s, according to Lee.

"It points to a contradiction that is as old as the United States," Lee says. "We have these very conflicting notions about who an American could be. There were very romantic proclamations that an American is someone who chooses to be an American. As long as you had it in your heart to accept the ideals and the values of the United States, then we — unlike countries that were based on a monarchy or hereditary citizenship — we had this much more inclusive definition of American citizenship. And in many ways that was true. But in many other ways, it was very narrow."

The first naturalization law, for an example, was passed in 1790. And it was relatively open, mainly because the country was starting from scratch. It said that "any alien, being a free white person," could apply for citizenship as long they lived in the United States for at least two years. But that law did, of course, excluded African slaves, Native Americans and others.

Even when the U.S. seemingly has taken steps that would seem anti-xenophobic, it falls back. The Immigration Act of 1965 overturned immigration quotas that were based on national origins, originally designed to favor immigrants from European countries. The law paved the way for millions of legal and illegal immigrants from Latin America and elsewhere. And that spurred some xenophobic reaction. From a 2015 piece by the nonpartisan Migration Policy Institute:

The law's proponents see it as a historic success and assert that the estimated 59 million immigrants who have come to the United States since its passage [2015 numbers] have made the country younger, infused it with diversity and talent, and generated prosperity and economic growth. Critics contend that high admission levels of diverse groups of immigrants have created more competition for low-skilled U.S. workers, and shattered the country's cultural homogeneity.

The Dangers of Xenophobia

"The connection with racism is really powerful," Lee says. "So what's wrong with racism? It treats people unequally. It demonizes entire groups as dangerous and threatening, either because they're racially different, or they practice a different faith, or that they're just thought of as inherently dangerous. And we treat them as a group ... rather than treating them as individuals."

Worse yet is when the government codifies that way of thinking into law. "The United States, time and time again, acted on those beliefs and made policy," Lee says, "that justified unequal treatment."

It's hardly the "self-evident" truth etched forever into the Declaration of Independence that "all men are created equal." But it's undeniable at this point: America — again, like many other countries — has a xenophobia problem. It's deep-rooted and insidious.

And it won't be cured any time soon.

Now That's Scary
There are numerous current examples of xenophobia in the U.S. A literal wall is being built on the Southern border because of the unfounded fear that immigrants bring crime and disease and they'll take our jobs. President Donald Trump has banned people from predominantly Muslim countries for fear of terrorism, a policy that was upheld by the U.S. Supreme Court in June 2019. Trump also calls the deadly coronavirus a "foreign" virus or the "Chinese virus," prompting fear of Chinese people. Of note: About 90 million people in America are immigrants or U.S.-born children of immigrants. That's about 28 percent of the total population.