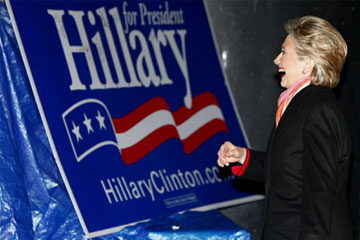 Hillary Clinton has been blamed at times for being too masculine, as well as too feminine.
Brian Ach/Getty Images

One of most debilitating stereotypes that women running for office must overcome is that men are better at critical decision-making. The electorate values seemingly feminine traits of honesty and compassion, but when it comes time to defend the nation, levy taxes or sign controversial legislation into law, it's the masculine-aligned decisiveness that's required. For that reason, political commentators have often claimed that female politicians must walk a tightrope of abandoning behaviors linked to their XX chromosomes but not becoming overtly masculine, either; they should be firm, but not aggressive; pleasant, but not emotional [source: Washington Post]. Just ask Hillary Clinton, a prime example of a prominent female politician who has been scrutinized for everything from her pantsuits appearing too harsh to her crying at a 2008 New Hampshire campaign event appearing too weak [source: Breslau].

As more women become engaged in modern politics, the more apparent gendered expectations like these have become. For instance, a 2010 study from Yale University concluded that people view a female politician advancing through the ranks as an unsavory form of power-seeking, whereas a man in the same position doesn't receive any backlash [source: Okimoto and Brescoll]. In another Yale study published in 2008, the researchers found that based on facial appearance alone, potential voters identify male faces as being more competent and dominant, whereas female candidates were labeled as attractive and approachable [source: Chiao and Bowman]. However, other studies have also unturned evidence that there's more than some sort of inherent sex-bias going on at the polls.

While gendered expectations exist in voters' minds, they actually don't make a significant dent on Election Day. Statistically, in fact, female candidates are just as likely to win as male candidates [source: Lawless and Fox]. But reaching that victory podium may also demand above-average fortitude and determination to shirk off political obstacles, carve out the additional time to manage a campaign and hit the streets for donors who may not be as familiar with a female candidate's name and platforms. And that, Stanford researchers have proposed, is the very reason why the women in Washington tend to outperform the men on paper; it takes an especially high caliber of woman to charge into the minority and stake her claim [source: Anzia and Berry]. They also project that as politics becomes more gender equal that performance gap also will narrow since the field will attract a wider range of contenders.

In the meantime, the important lesson for women in politics isn't that voters judge them differently from men on the ballot but that their participation can have a positive ripple effect. In a 2006 case study conducted among Indian villages that had enforced quotas for women in leadership positions, the researchers noticed that the longer the villagers witnessed women in power, the fewer gendered biases they expressed [source: Beaman]. Politicians are often called up to lead by example, and for women, that duty is especially pertinent for the future of their roles in governing around the world.