Why is it bad luck to spill salt?

Browse the article Why is it bad luck to spill salt? 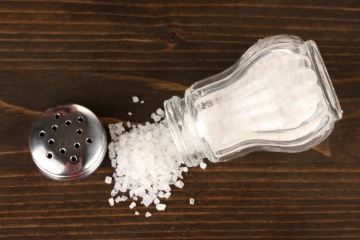 Ever heard the theory that it's bad luck to spill salt and you should throw it over your back as soon as possible? Well, ever wondered where it originated?
serezniy/Thinkstock

If you tend to be a sloppy cook, you might want to be extra careful when adding salt to your meal. One long-held superstition says that spilling some of that good old sodium chloride might bring you some bad luck. Why is toppling over some salt an omen of misfortune?

The most obvious theory, and the root of this superstition, is that salt was a precious commodity in ancient societies. Because of its difficulty to procure and its high cost, salt became a form of currency. In fact, the word "salary" originates from sal, the Latin word for salt, possibly because Roman soldiers received salt as part of their compensation. (This is also where we get the expression "not worth one's salt.") Spilling something as highly prized as salt was bad form and a big waste, which grew into a warning that this carelessness would bring one bad luck.

As superstitions tend to do, the spilled salt superstition grew and evolved over centuries, with different cultures assigning different meanings. If you spill salt, here are some of the things that might happen:

Some also say it's bad luck to spill salt because of Leonardo da Vinci's painting "The Last Supper." In a detail of the painting, you can see some spilled salt near Judas Iscariot's elbow, which he presumably knocked over. According to the Bible, Judas later betrayed Jesus Christ, so spilling salt became associated with dishonesty and treachery — bringing bad fortune and bad luck.

Back to present day. If you're anticipating a wave of bad luck because of that spilled salt, never fear — you can undo that curse by simply taking a pinch of the spilled salt and throwing it over your left shoulder. According to legend, the devil stands behind your left shoulder, waiting for a way in. Spilling salt, as we said before, gives him that invitation. If you toss some of the errant salt over your shoulder, it will go into the devil's eyes, blinding him and rendering him powerless. Or, you can start crying and make enough tears to dissolve all the spilled salt. You'll need to be pretty upset, though, if you spill a lot of salt.