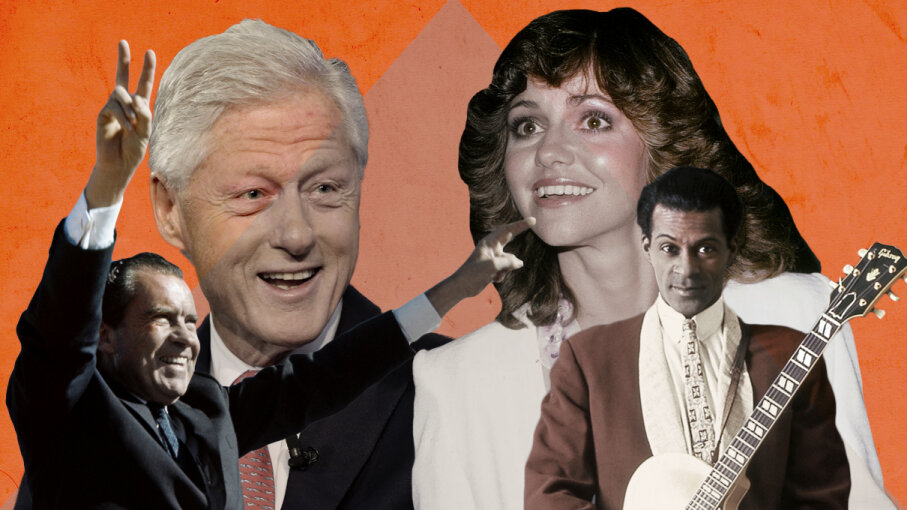 Nicknames or "pet names" — shortened forms of standard names — exist in every language and every culture dating back to the first written records. In English, some nicknames make perfect sense: Dave for David, Pete for Peter, or Liz for Elizabeth. But others are totally weird: Margaret somehow becomes Peggy, Charles becomes Chuck, and Richard, quite famously, becomes Dick.

There isn't any overarching reason as to why nicknames develop that seem to make no logical sense. But there are some good stories behind some of the them. We reached out to Cleveland Kent Evans — psychology professor, author of "The Great Big Book of Baby Names", name columnist for the Omaha World Herald and former president of the American Name Society — to clue us in on the surprising origins of some of the most perplexing English nicknames. Let's start with a fun one.

Unlike most English nicknames, this one does not come from England. Chuck is an entirely American invention with a colorful backstory. The first famous Chuck was a 19th-century New York City gangster named Chuck Connors, whose given name was George Washington O'Connor, not Charles.

So how did he get the nickname "Chuck"? Connors grew up in the Chinatown neighborhood of Lower Manhattan and even learned enough Chinese to earn him the unofficial title of "Mayor of Chinatown." Connors claimed that he got the nickname Chuck because of his love for chuck steak, but Evans has another theory.

"If you look at the 1850 US census, which was the first to list full names, almost all the people who had some variation of 'Chuck' in their given name were Chinese," says Evans, who thinks Connors more likely picked up a nickname from the neighborhood.

When Connor died in 1913, some of the New York papers erroneously printed his given name as Charles, making the first (if false) connection between Charles and Chuck. But since Charles lacked any catchy alternative nicknames at the time, Chuck stuck.

Henry to Hank (and Harry)

Prince Harry — who was christened Prince Henry — attends the launch of the team selected to represent the UK in the 2017 Invictus Games in Toronto in London, England.
Jeremy Selwyn WPA Pool/Getty Images

Hank is another American nickname, but its origins are murkier. The most likely explanation, says Evans, is that Hank is derived from Henk, a Dutch nickname for Henry that would have been used by large the communities of Dutch settlers in New York and New Jersey in the 17th and 18th centuries.

But more interesting is the fact — little known to most Americans — that the original nickname for Henry was Harry. (Prince Harry's real name is Prince Henry of Wales.)

Evans says that Harry isn't so much a nickname of Henry as a mispronunciation of Henri, the original French form of Henry that arrived in England with the 11th-century Norman Conquest. Since few people could read or write in Medieval England, they pronounced the new name as best they could, sounding more like Harry than Henry.

Many of the most common English nicknames can be traced back to Medieval times, when half the men in England were named either John or William, and the other half were Robert or Richard. Evans says that inherited surnames didn't even show up until around 1100. Before that, people used occupations or lineage as last names: John the Smith or Robert son of William.

In those days, nicknames were essential to keeping Richard your neighbor straight from Richard your brother. A popular trick was to create rhyming names. The original shortened form of Richard was Rick, which became Hick and Dick.

Credit the Irish with this one. Evans says that a curiosity of Irish Gaelic will turn a "W" sound into more of a "B" depending on whether the word is the subject or object of a sentence. Either way, the first written evidence of a William being called Bill was in the late 17th century when Irishmen mocked King William III of England by calling the hated Protestant conqueror "King Billy."

The ladies also got in on the rhyming act, but took it a step further. In the 1500s, there was a fad for rhyming "M" names with "P." Here's how Evans explains the journey from Margaret to Peggy:

Margaret to Marg to Mag to Meg to Meggy to Peggy.

The same thing happened to the name Martha. It started with the nickname Math, which moved to Matty, then switched to Patty, and eventually Patsy. Thomas Jefferson's wife, Martha, was known as Patty. Neither Patsy nor Patty had anything to do with Patricia.

In a final twist, another common nickname for Margaret was Daisy. Don't even try to get there using the rhyming method. This one was adopted by educated Brits who recognized that the French word for daisy, the flower, was Marguerite.

A few nicknames are attributed to baby talk. Little children have a notoriously hard time pronouncing the letter "R" which often comes out sounding like an "L." Evans thinks that's the best explanation for the conversion of Sarah to Sally and Mary to Molly. (The rhyming phenomenon also takes Mary from Molly to Polly.)

Some dialects of English used to use "mine" in place of "my." That's the best guess as to how we got from Anne to Nancy. It starts with folks saying "mine Anne," which got shortened to Nan and cute-ified into Nanny, Nansy and then Nancy.

There are a couple of possible explanations for this one, Evans says. The first has to do with a popular "pet" form of names from Medieval England where folks added "kin" as a suffix. William was Wilkin. Peter was Perkin. Again, you can still see these nicknames today in surnames like Wilkinson and Perkins.

John, Evans says, would have been changed to Jenkin. That could have easily been shortened to Jenk which is a quick trip to Jack.

Another theory points back to the Norman invasion and the arrival of the name Jacques, which is actually the French form of James, not John. But the cultural mingling of Jenk and Jacques could have been enough to produce Jack from John.