Why Do We Care About the First 100 Days?

Browse the article Why Do We Care About the First 100 Days? 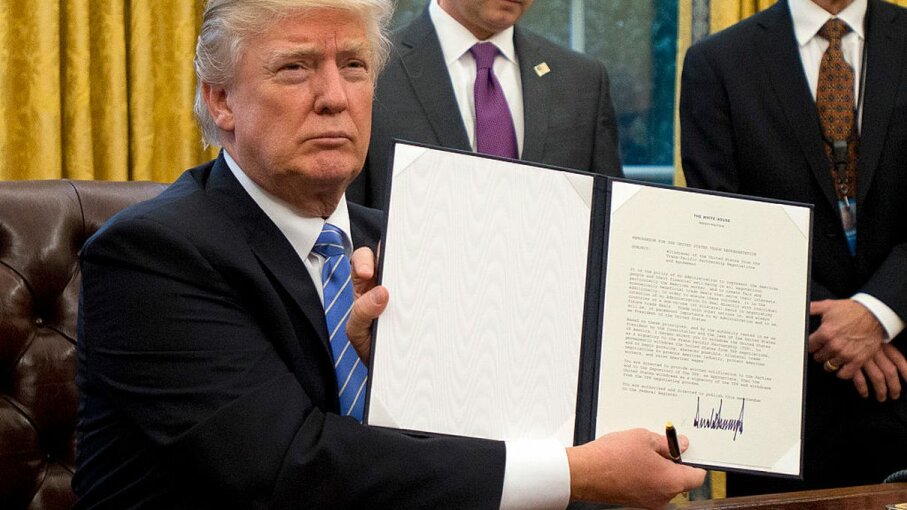 U.S. President Donald Trump shows the Executive Order withdrawing the US from the Trans-Pacific Partnership (TPP) after signing it in the Oval Office of the White House in Washington, D.C. on Jan. 23, 2017. Ron Sachs - Pool/Getty Images

The minute that Donald J. Trump assumed presidency of the United States, the clock started ticking on his first 100 days in office.

Well before he was elected, Trump was promising decisive action in his first 100 days to reverse his predecessor's policies on guns, immigration, health care, tax cuts and more.

But why the fascination with a president's first 100 days? After all, we elect presidents for terms of 1,460 days. What's so important about these first three months and change?

"We started using the term 'first 100 days' after Franklin D. Roosevelt's first 100 days," explains Jonathan Ladd, associate professor of public policy and government at Georgetown University. "FDR's first 100 days were so productive that we've talked about it ever since."

FDR came to office in 1933 in the depths of the Great Depression. He signed 76 pieces of legislation in his first 100 days, including 15 major overhauls and new programs. He took the U.S. off the gold standard, revamped the banking system and created jobs through the Civilian Conservation Corps and the Tennessee Valley Authority.

No president since has even come close to FDR's productivity — Kennedy passed 26 bills, Reagan just 9, Obama only 11 — but that hasn't shaken the fixation on the first 100 days. It remains a benchmark of political efficiency and a convenient measure of a new president's power. A study showed that before the 81st Congress (1949-1951), the average number of laws passed during a president's first 100 days was 46, compared to 16 for later time periods.

In his first 100 days, Trump has signed 28 pieces of legislation into law, but 13 of them were undoing Obama-era rules, for instance on environmental regulations. Just six were of legislative substance.

And despite having Republican majorities in both the House and Senate, Trump was unable to repeal and replace Obamacare, a signature campaign promise. Nor has money so far been allocated for building a border wall with Mexico. Nor has there been a trillion-dollar infrastructure reform package. A one-page tax cut plan was unveiled on Day 97 of Trump's 100 days, but it so far is too sketchy to be considered in full.

Trump's travel ban on nationals from seven majority-Muslim states also has been blocked in federal court. The biggest victory so far has been the appointment of Neil Gorsuch to the Supreme Court, keeping a campaign promise to select a conservative for this court.

In an article for FiveThirtyEight.com, political scientist Julia Azari noted that presidents often enjoy a "honeymoon" with Congress during their first 100 days, making it easier to push the new White House's legislative agenda. And the effect is strongest for presidents who confront divided government.

One possible explanation for the 100-day honeymoon is that, historically, most incoming presidents enjoyed high approval ratings with voters. In less divisive times, senators and representatives from the opposing party would cross the aisle as a nod to presidential popularity (and more importantly, to assuage voters back home).

Even though President George W. Bush won the 2000 election by the slimmest of margins, Georgetown professor Ladd explains, he was popular enough that conservative-leaning Democrats helped pass his tax cut package early in his tenure. Trump will likely have no such luck.

"Popularity matters less now because there are a lot fewer conservative Democrats and liberal Republicans than there used to be," says Ladd. Plus, Trump is significantly less popular than previous incoming presidents. His approval ratings at his inauguration were in the high 30s. At the 100-day mark, they stand at 40 percent. "If Trump was even moderately popular, Democrats from red states like West Virginia, North Dakota or Indiana would feel some pressure to vote for his initiatives in the first 100 days."

Changing of the Guard

Another reason why more legislation often gets passed in the first 100 days often has to do with a political changing of the guard. When the White House and Congress are finally controlled by the same party, previously defeated bills get a second chance at life.

President Bill Clinton signed the Family and Medical Leave Act within days of taking office in 1993. He could act so swiftly because the same bill had previously been passed by Congress and vetoed by President George H. W. Bush.

"Congress didn't have work to do to write the bill and figure things out," says Ladd. "It was ready to go."

The same thing happened with the Lilly Ledbetter Fair Pay Act, which President Barack Obama signed into law nine days after his inauguration.

One prime example is the "global gag rule," which bars any foreign organization receiving U.S. aid from performing or promoting abortions. The rule has been enacted and rescinded by executive order every time the White House has changed political hands since Ronald Reagan. Trump reinstated the executive order.

He also signed an order to pull out of the Trans-Pacific Partnership, though he changed his mind on pulling out of NAFTA. In all, Trump signed 29 executive orders in his first 100 days, versus 19 for Obama and 11 for Bush.

Now That's Interesting
If precedent stands, then Trump's most substantial legislative moves will come well beyond the somewhat arbitrary 100-day mark. President Lyndon B. Johnson didn't sign the Voting Rights Act until seven months into his term. Obama didn't enact the Affordable Care Act until more than a year into his first term.