Browse the article Why do people toast before they drink? 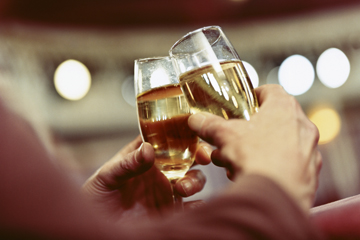 The idea of toasting stretches back even further than "The Odyssey."
Paul Thomas/Getty Images

Champagne fills your glass, bubbles collecting along its etched interior and creating rich foam across its top. Within moments, the room seems to move in unison. Arms raise and glasses are held high. It's time for a toast, one of the world's most enduring traditions.

Whether it was New Year's Eve, your best friend's wedding or dinner at a Michelin-starred restaurant, odds are you've toasted a special occasion by raising your glass. The art of the toast transcends borders and ages, and is as popular now as in ancient times and as prevalent in the United States as in the Far East.

Put simply, a toast is a call to drink in honor of a person or a concept, such as good health. Its many iterations throughout the centuries have resulted in short and to-the-point sentiments, such as "Cheers!" There are also a host of eloquent, colorful renditions, such as the traditional Gaelic toast, "May the road rise to meet you, may the wind be always at your back, may the sun shine warm upon your face, the rains fall soft upon your fields and, until we meet again, may God hold you in the palm of His hand."

The modern toast is said to have originated in early 1700, nearly by accident. In one of the most enduring mash-ups of history and folklore, Sir Richard Steele captured the public's imagination with his article about the world's inaugural toast in a 1709 edition of Tatler. The story is that a beautiful woman was taking a dip in the cold waters at Bath when a man became inspired, filling a cup with the water and drinking to her health [source: Steele].

The idea of toasting before taking a drink predates lovely ladies splashing about in the English countryside. For centuries, people dropped pieces of spiced toast into their wine because the seasonings and charcoal flavored and tempered the wine. The bread-laden wine, accompanied by salutations, is where the toast got its name. A toast became a way to offer glad tidings and good luck to its drinkers as they collectively celebrated health, honor and their host.

In "The Odyssey," Ulysses drank to Achilles' health. In ancient Rome, diners raised their glasses to the Emperor Augustus at every meal. Many other cultures, including the Egyptians, Hebrews, Huns, Persians and Saxons, pledged their honor by raising a glass, too [source: Khrais]. The next time you raise a glass, you'll not only be making a toast, you'll be joining a historical movement.