Why did people use calling cards? 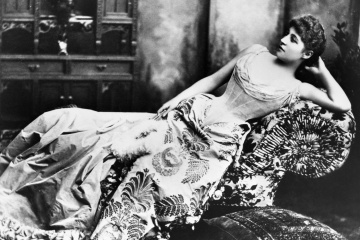 Actress Lillie Langtry reclines circa 1888, perhaps waiting for the butler to let her know someone is calling.
© Bettmann/Corbis

When we're talking calling cards, we're not talking the prepaid cards one uses to speak with loved ones on the telephone. Those might have interesting histories, but if we were to ask why people used them, the answers would be "mom wouldn't let me have a cell phone" or "they're used as currency in prison."

No, in this case we're talking about social calling cards, like the ones Jane Austen characters wait with bated breath to receive from the sisters of handsome bachelors. While calling cards were used until the 20th century in America, we're talking primarily about the ones used in the Georgian and Victorian eras of British history, from about 1714 to 1901. At their simplest terms, these calling cards indicated a visitor came by the ol' homestead (or grand London mansion). But don't think that calling cards didn't have a terribly complicated and intricate etiquette behind them.

Before we dive into some of the complexities of calling cards, let's talk about the social call in general. Back in the day, it was perfectly fine to just drop by someone's house for a chat, since you couldn't exactly ring them up or text a warning. However, "dropping in" was nothing casual. There were certain hours when women (and it was primarily women of leisure who did this) accepted callers, mostly in the afternoon. There were also "morning calls," which had nothing to do with time of day; you just wore more casual dress than you'd wear to the usual afternoon calls [source: Mitchell].

Now here's where calling cards come in. Just because you stopped by someone's house doesn't mean you were let in right away to see the mistress. Instead, you (or your groom, if you were in a carriage) might present your card to the butler, who would then let you know if your would-be hostess was taking calls. (Keep in mind it was perfectly acceptable not to take callers, even if you were home.) If she wasn't, you'd leave your card as a sign that you stopped by. On some occasions, you could simply leave your card without stopping to visit — a marriage or bereavement might merit such a card, for instance. In general, cards were to be returned with cards and calls returned with calls within a week [source: Boyle].

But we're not done yet. Certain folds were occasionally used in cards to indicate the reason for a visit, although different sources cite different rules. For instance, a bent lower left corner might have meant you were telling the mistress of the house you were about to take leave [source: AVictorian]. The exact meaning of all these folds and bends probably changed with social structures and time.

So next time you stop by Chad's to catch the tail end of a basketball game and he's not there, you know what to do. Leave your card with the butler, and give him a week to call back. If he doesn't? Treat it as the offense it is.