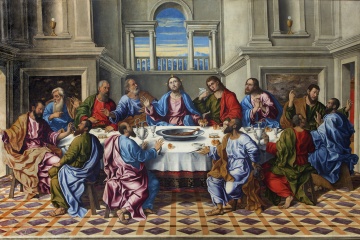 Having a 13th person at a table evolved into a sign of bad luck because of Judas Iscariot and the Last Supper.
sedmak/iStock/Thinkstock

Many cultures believe the number 13 is extremely unlucky. So unlucky, in fact, that some people have a disabling fear of it. The name for this condition is triskaidekaphobia, a term coined by a psychoanalyst around 1910 [source: Hansen]. Phobias of the number abound: It's pretty common to think Friday the 13th is the unluckiest day of the year or that the 13th floor of a building is bad luck. Many buildings simply skip from the 12th to the 14th floor, and in Florence, Italy, you won't find a house numbered 13 on any street — you'll see only 12 and 1/2. In England, some restaurants don't even have tables numbered 13, even though most chefs admit they don't really buy into the superstition.

Another culinary superstition is that if 13 people eat together at the same table, one of them will die within a year. Its origins stem from the Bible, as many superstitions do. At the Last Supper, 13 people ate together at one table. Twelve of these men were Jesus Christ's disciples, but the 13th was Judas Iscariot, who later betrayed Jesus and became a symbol of untrustworthiness and deceit. Having a 13th person at your table, then, evolved into a sign of bad luck.

There's also a Norse legend in which 12 gods gather for a meal in Valhalla. Loki, the god of strife, crashes the party and arranges for Hoder (the blind god of darkness) to shoot and kill the favorite god, Balder, with an arrow. Finally, a more mundane theory suggests that since most china comes in place settings of 12, a 13th person at the table would suffer from loneliness and hurt feelings.

The French figured out an interesting (and profitable) way to avoid the unlucky happenstance of 13 dinner guests at one table. They were called les quatorziens, which might sound like an elite crime-fighting club, but the title simply means "the fourteen." Quatorziens were socialites who, for a fee, attended dinner parties as the 14th guest and prevented bad luck from befalling events and guests. An innovative solution!

A cool nickname? Getting paid to eat? Where do we sign up?