by Kate Kershner Oct 11, 2016
All sorts of places beyond schools can encourage language and learning. Tang Ming Tung/Getty Images

For a while now, we've known that babies and toddlers who grow up in an environment with significant amounts of language and vocabulary are going to have better outcomes as older children.

We've also learned that socioeconomic status has a lot to do with which kid hears more language. Kids from impoverished backgrounds tend to get less exposure to language, which in turns gives them "worse" learning outcomes as they age. So how do we make sure that kids and caregivers are engaging in conversations and learning?

Brenna Hassinger-Das is a post-doctoral fellow at Temple University who studies how play and language development can foster learning in our communities. She's part of a team that's developing a pilot project in Philadelphia called Urban Thinkscape. The project will use an otherwise ho-hum public space next to a bus stop to create centers of play — and engagement — for children and caregivers.

From puzzle benches at the bus stop to a streetlight shade that models animation, the environment is designed to get parents and kids thinking — and talking. "It's not trying to force a certain type of interaction," Hassinger-Das says. "We're actually very interested to see how people will use these."

Hassinger-Das sees broader possibilities for community involvement beyond adding fun learning experiences to just public spaces. Hospitals, supermarkets or laundromats (!) can be breeding grounds for language and learning, too. For example in the "Supermarket Speak" study, researchers posted signs in the local grocery store with the text, "Question for your child: Where does milk come from?" Another one had "Question for your child: What's your favorite vegetable?" Sounds like more fun than telling kids, "Don't touch that!" or "Put that back."

Interested in getting something similar going on in your community? Hassinger-Das recommends four design principles to consider when fostering caregiver and child engagement, and gives credit to architect Itai Palti for his help in creating them.

1. Make It Intriguing. "They should arouse curiosity in passers-by," Hassinger-Das says. "Make people want to come and figure out what's happening."

2. Make It Interactive. "We know from research that's one of the best ways that people learn," Hassinger-Das says.

3. Make It Intuitive. "If we're putting these interesting installations in communities, we want them to be accessible to people who speak different languages, who may have disabilities," she says. In Urban Thinkscape, for instance, they showed focus groups designs for the area and asked them what they thought the installation would do. Using the feedback, they could determine if the designs were simple enough to understand.

4. Make It Integrated. Hassinger-Das points out they're not building playgrounds; these spaces should fit organically into the community. While it would be fun to have pop-up children's museums on every corner, this is more about finding interest in the space at hand.

All that sounds great for language and vocabulary, but more talk between parents and little kids also helps them to build foundational math skills as well.

"The way that we do that is through language," Hassinger-Das says. "If they're putting together Legos or blocks, it's a great way to foster spatial language — talking about on top of, underneath, above, below. We know that having some of those basic skills really underlies a lot of later mathematical ability."

Which leads us to the inevitable conclusion:

"Talk to your child," Hassinger-Das says. "It's really important to have that back and forth. It's not a solo; it's not just you talking at your kid. Asking questions, probing at what your kid is interested in."

Robots Made With Living Tissue? That Future Is Arriving Now 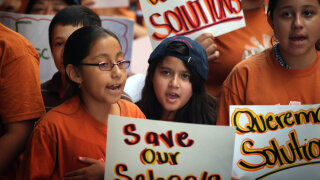 It Turns Out 'Screen Time' Isn't That Bad for Kids