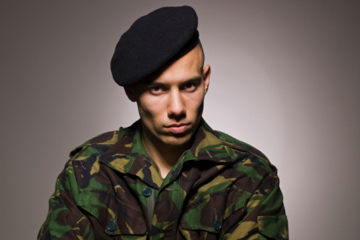 How do the branches of the military condition soldiers to kill?
Jupiterimages/Polka Dot/Thinkstock

Assuming we aren't all killers who refrain from causing harm due to social or psychological restrictions, what could create a killer? According to soldiers like retired U.S. Army Lt .Col. Dave Grossman, it's a process involving four strategies: brutalization, classical conditioning, operant conditioning and role modeling [source: Grossman].

Brutalization is the process in which you lose a sense of your own worth as an individual. Within the military, this is a highly regimented process. New recruits undergo difficult and sometimes humiliating training experiences to wear down a sense of individuality. It helps the military chip away at the resistance most people have to the notion of ending someone else's life.

The military also conditions soldiers to become effective. In classical conditioning, the goal is to associate a desired behavior with a reward. Grossman says this isn't used often in American military training because it seems morally reprehensible to associate violence with rewards. In operant conditioning, soldiers train in simulated environments to develop an automatic response to stimuli. An example is firing at human-shaped targets.

It's possible that killers who were never soldiers -- including most serial killers or mass murderers -- had experiences similar to those of a military recruit. The major difference is that with these killers, the exposure wasn't in a controlled environment. The backgrounds of many killers show a history of brutalization. In several cases, the killers began to enact violence on weaker creatures as a way of asserting control or demonstrating behaviors learned through being brutalized.

Many killers have expressed feelings of alienation and have shown evidence of harboring violent fantasies before they commit to killing. In some cases, the killer suffers from a mental disorder or brain damage that either inhibits or prevents the social and psychological restrictions humans have toward killing other people.

Whether we're repressing urges that are more than several millennia old or we're naturally averse to ending the life of another person, it's clear that in most cases we need a catalyst to push us to killing. Identifying and understanding the elements that can change a person at risk into a killer may help us treat and prevent tragedy in the future.

Learn more about psychology, crime and related topics by following the links below.