The Postures of Tai Chi 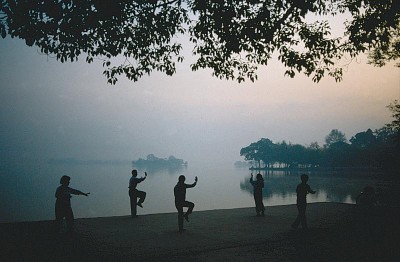 The art of tai chi is made up of a series of interconnected postures.
©2007 Publications International, Ltd.

Each of the movements in tai chi is known as a posture or a move. When these tai chi postures are connected, they are called a form or a set. Over time, under the guidance of master practitioners, many different forms have developed. All of them, however, rely on the same underlying principles.

It is likely that tai chi is the series of rhythmic dancelike movements we know today because of its relationship to the martial arts. Some believe that the exercises originally were simply a series of unconnected postures used exclusively to maintain health.

This may well be the case, since many systems of exercises, such as some types of chi kung and yoga, rely almost entirely on standing, seated, or prone postures. While these systems can be very rhythmic in themselves, there is no question that tai chi can clearly be distinguished from the others by its involvement with the movement of the feet and legs.

At the same time, tai chi does not sacrifice the meditative spirit common to some forms of yoga. In fact, the art of tai chi chuan is considered a moving meditation. The central difference between a seated meditation and tai chi is that in tai chi, the entire body, including all the internal organs, muscles, tendons, and limbs, work together.

The tai chi postures themselves and the way they are linked together are very strictly organized, and dedicated practice under expert tutelage is required to master the finer points governing them.

Since the tradition is so old, it has been refined by generations of instructors. Through trial and error during hand-to-hand combat and through careful analysis, tai chi has been developed to the point where, regardless of the particular training school, there is a set of universal principles held to be true by the majority of schools.

Typically, these principles are learned as the tai chi postures themselves are taught. Instruction is simultaneously mental and physical, a convenient structure for students because learning becomes a step-by-step process in which intellectual knowledge always corresponds to a physical exercise. This means that intellectual development will not exceed physical development.

Long forms of tai chi naturally take a longer period to learn since they are composed of many more tai chi postures. A long form may contain 60, 108, or even 150 movements, while a shorter form might have only 27 movements. Aside from the health benefits and martial applications, one of the great joys of learning this art is that there seems to be no end to its depth. This means that taichiists are continuously challenged to improve their art.

On the next page, learn how an energy called "chin" is used in tai chi.