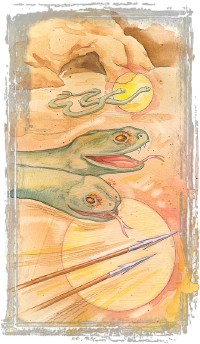 Five weapons of tai chi also relate to the ideas behind the Five Phase theory. Just as the elements represent the inner quality of each movement, they play the same role for weapons. It can be said that there is a partnership between each movement and its allied weapon. Each pair has distinct applications, and these are related to particular tactics in hand-to-hand combat.

In terms of the weapons themselves, earth is represented by an empty hand, metal by a saber, wood by a staff, water by a two-edged sword, and fire by a spear.

In the same way that earth is thought of as mother to the other elements, all weapons are considered to be descendants of the empty hand. In action, the natural ability of the open hand is grasping. It can control the two-edged sword if it can grasp it. This depicts earth mastering water.

The two-edged sword defeats the penetrating force of the spear. Here water extinguishes fire. The spear, in turn, subdues the hacking effect of the saber: Fire overcomes metal. The hacking action of saber, in its turn, can split the wooden staff; and so we see metal overcoming wood. Finally, the staff will break the bones of the open hand, and we see wood overcoming earth.

Each of the weapons of tai chi is also paired with a tai chi movement. The open hand, for example, is paired with central balance, a term used to express the inner poise and assurance from which all other movements should proceed.

Step and look left is related to metal and so is hard by nature. In action, a step and look to the left is followed by a right fist. If we study the cycle of construction, we find that metal is produced from earth and so, as a result of this association, the right fist should be delivered with inner poise and assurance.

Water depicts a special type of retreat. This is not the full flight of a defeated army but the tactical surrender of a useless position. In terms of the tai chi postures, it means to step back and it possesses the quality of suppleness. When the hardness of metal supports the pliability of water, we have a defensive position that is flexible. But it could become an offensive position in an instant.

Look right is the movement related to wood, and it is said to embody might. When associated with water, the move implies a supple strength. Advance is associated with fire and refers to the offensive movement of stepping ahead. Coupled with wood, the natural ferocity of fire is fueled and increased. As you can see, the creative sequence is applied in an offensive manner.

The destructive sequence is applied in exactly the opposite manner, defensively. In this sequence, we see the phases, in the form of the elements, used to counteract each other. Earth overcomes water, and water subdues fire. Fire counters metal, which, in turn, subdues wood. The two cycles can also be understood in terms of expansion, represented by the aggressive pattern, and contraction, represented by the defensive pattern.

Tai chi is not just for self-defense. Learn the beneficial effects tai chi can have on a practitioner's health on the next page.