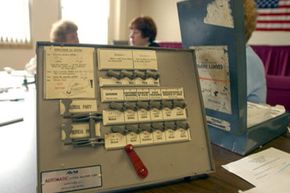 Instructions for voters are displayed at a Homestead, Penn., polling station on November 2, 2004.
Jeff Swensen/Getty Images

Voters in 32 states may be in for a rude awakening when they arrive at the polls on Election Day, in the form of an ostensibly innocent question: "May I see your ID?" You've heard it before, of course, but the query could decide the next election.

New voter identification laws have sprung up across the country, requiring registered voters to show a government-issued identification card — a photo ID in 17 states — in order to cast a ballot [source: NCSL]. Supporters of these new voter ID laws argue that tighter security at polling stations cuts down on voter fraud and ensures cleaner elections. But critics of voter ID laws see something far more devious: a plot to disenfranchise or at least discourage targeted segments of the American electorate.

Voter suppression — also known as caging — is any action or behavior intended to deter an individual or group from voting. In the history of American politics, a wide range of dirty tactics have been used by both major political parties to intimidate or disqualify voters traditionally aligned with the opposition. During the "Jim Crow" era in the southern U.S., state and county governments evaded the 15th Amendment — prohibiting voter discrimination based on race or color — by imposing a series of literacy tests, poll taxes and even thuggish "poll workers" to block African-American voters from casting a ballot. Modern methods of voter suppression are more subtle, but the intention is the same: to employ legal and illegal means to affect voter turnout in an election.

Critics of voter ID laws are crying foul, accusing the states of imposing a solution in search of a problem, citing Justice Department statistics that voter fraud is extremely rare: 86 convictions out of 300 million votes cast in recent elections [source: Berman]. The real reason for the rash of new voter ID laws, critics argue, is that certain Democratic-leaning voters — African- and Hispanic-Americans, students, the elderly and the disabled — are less likely to possess a valid government-issued ID [source:American Civil Liberties Union]. Strict voter identification laws, they say, have the intended effect of discouraging or disqualifying traditionally Democratic voters.

Supporters of the voter ID laws insist that voter fraud, particularly by third-party voter registration groups and illegal immigrants, is a serious problem. Moreover, if requiring a photo ID to vote is discriminatory, where are the cries of civil rights violations at the airport security kiosk or the liquor store [source: Tobin]? In a landmark 2008 decision, the Supreme Court sided with voter ID supporters in Indiana, citing a "valid interest" in deterring fraud and finding no significant obstacles to obtaining an ID [source: Stout].

In an era of passionately partisan politics, both parties will do everything in their power to gain a political advantage during an election. The question is, when does a savvy political tactic become an unconstitutional breach of civil rights?

In the rest of this article, we'll examine the line between dirty politics and voter suppression, and see where Congress and the Supreme Court have weighed in. Let's start with a look at the ugly history of voter suppression in the U.S.

History of Voter Suppression in the U.S.

The history of voter suppression in the U.S. is really the history of voting rights in the U.S. To begin, it's important (and surprising) to note that the U.S. Constitution does not explicitly include a right to vote [source: Fairvote.org]. In fact, only members of the House of Representatives were elected "by the people" according to the 1776 Constitution. Although the 17th Amendment enabled the direct election of U.S. senators, we still don't directly elect our president; technically, that's up to the Electoral College.

The original version of the Constitution and Bill of Rights left it entirely up to the states to determine who constituted "the people," and therefore had a right to vote at all. At first, only white men — and freed African-American slaves in four states — who owned property were allowed to vote, then states slowly began to drop the property requirement, opening it up to all white males and some African-American males by 1850 [source: Keyssar]. All women, non-African-American minorities and many non-Christian religious groups were denied the franchise.

After the brief Reconstruction period following the Civil War, in which freed slaves earned the right to vote and hold office, there was a sharp political shift in the South. Even though the 15th Amendment formally extended the right to vote regardless of "race, color, or previous condition of servitude" in 1870, newly elected conservative Democrats — known as Dixiecrats — began to impose a series of laws in 1877 designed to suppress the black vote.

These Jim Crow voting laws included requirements to pass literacy tests, nearly impossible for uneducated former slaves. Other states instituted poll taxes, a financial burden that many poor African-American (and whites) were either unable or unwilling to pay. Some precincts even held "whites only" primaries in direct opposition to federal law. Attempts to break or protest Jim Crow laws often met with deadly retribution. In fact, the intimidation and suppression campaign was so successful that only 3 percent of voting-age African-American southerners were registered to vote in 1940 [source:American Civil Liberties Union].

Although women were finally extended the right to vote in 1920 through the 19th Amendment, it wasn't until the Voting Rights Act of 1965 that the federal government finally eradicated Jim Crow voting laws in the southern U.S. The Voting Rights Act explicitly banned any "test or device" to qualify voters on the basis of literacy, education or fluency in English [source: Department of Justice]. Poll taxes weren't banned until 1966, when the Supreme Court found Virginia's poll taxes to be unconstitutional [source: Department of Justice]. 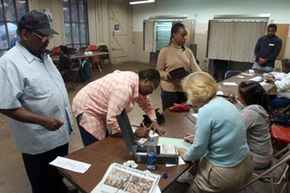 Intimidation has been a favorite tactic of voter suppression since the early days of Jim Crow. While open hostility and violence might have been the norm in the post-Reconstruction South, modern methods of intimidation are usually more subtle.

The Republican National Committee came under fire in the early 1980s when it sponsored the creation of a group called the National Ballot Security Task Force to patrol polling stations in search of voter fraud. The task force, staffed by off-duty police officers armed with loaded service revolvers and wearing blue armbands, was sued for steering black voters away from polling stations in New Jersey and forced to disband [source: Robbins]. In 2009, The Department of Justice sued members of the New Black Panther Party for Self-Defense (a group unaffiliated with the Black Panther Party of the 1960s) for brandishing a "police-style baton" to intimidate voters outside a Philadelphia polling station during the 2008 presidential election [source: Department of Justice]. And in 2012, advertising company Clear Channel Outdoor took down billboards in Ohio and Wisconsin noting the criminal consequences of voter fraud after public accusations of voter intimidation [source: Palmer].

Disinformation is another hugely popular tactic for suppressing votes in a target population. In the 2008 elections, Democrats in Nevada received robo-calls informing them that they could vote on November 5 — a day after the election — to avoid long lines. Hispanic voters in Nevada received similar messages saying that they could vote by phone [source: Freeman]. Voters in Lake County, Ohio, received official-looking mail stating that voters who had registered to vote through Democratic-leaning organizations would be barred from the 2008 election. And Michigan's Secretary of State had to fight a phone-based disinformation campaign telling absentee voters to mail their ballots to the wrong address [source: Zernike].

While intimidation and disinformation are recognized examples of voter suppression, other methods are much more controversial. A strict voter ID law in Indiana, for example, has the blessing of the Supreme Court, yet the Justice Department has moved to block similar laws in Texas and South Carolina under accusations that the laws "(deny) or (abridge) the right to vote on account of race, color or membership in a language minority group" [source: Chebium].

Similarly, a number of Republican-controlled state legislatures have passed laws barring convicted felons — even those who have served their time — from ever voting again. Other states have tightened the window for absentee, overseas and early voting, and banned same-day voter registration. Some states want to require voters to provide a proof of citizenship. Groups like the American Civil Liberties Union (ACLU) claim these laws have one purpose: to restrict and suppress the ability of minority, disabled and elderly voters from casting their vote [source:American Civil Liberties Union]. Supporters of these laws argue that increased restrictions only result in fairer, cleaner elections.

For lots more information on elections, civil rights and political controversies, explore the links on the next page.

It's always shocking for me to read about conditions during the Jim Crow era. As a Northerner, I tend to think that slavery and all of its wretched indignities somehow disappeared immediately after Emancipation. It's hard for me to understand how the legacy of Jim Crow continued for nearly a century, all the way until the Civil Rights era of the 1960s. Reading about the violent and well-organized suppression of the black vote during Jim Crow helps me understand why not only the African-American community, but those interested in protecting the civil rights of all Americans, respond so passionately to laws could potentially deny the vote to deserving citizens. This will be an interesting election for many reasons. It's my hope that everyone has their fair say. 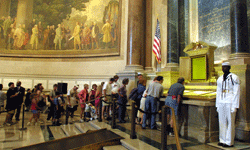 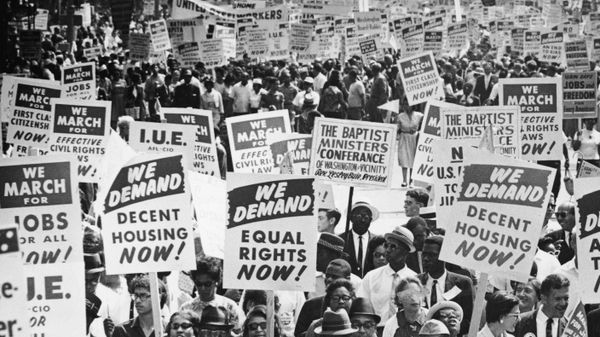 You May Like
How the Civil Rights Movement Worked
Explore More 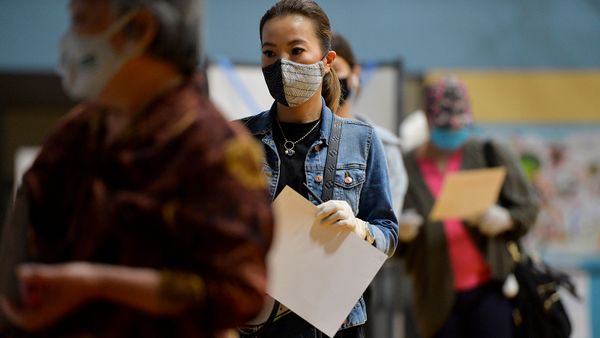