A voter drops off an absentee ballot on March 17, 2020 in Dayton, Ohio after the Ohio Primaries were canceled due to coronavirus. MEGAN JELINGER/AFP via Getty Images

After seeing and waiting in hours-long lines to vote during the 2020 primary elections in the midst of the COVID-19 pandemic, many U.S. voters say they are considering voting by mail in the November presidential election. An April 2020 Gallup Poll found that 64 percent of Americans want voting by mail as an option in November. However, that percentage varies greatly by party: 83 percent of Democrats surveyed support it compared to 68 percent of Independents and only 40 percent of Republicans.

These differences could have something to do with concerns about voter fraud. The same Gallup Poll found that nearly half (49 percent) of Americans think that voting by mail would lead to more voter fraud, though only 27 percent of Democrats hold that opinion compared to 76 percent of Republicans.

However, the Washington Post and the nonprofit Electronic Registration Information Center (ERIC) found just 372 possible cases out of 14.6 million votes cast in the 2016 and 2018 general elections of double voting or voting by deceased people by mail. In other words, only a minuscule 0.0025 percent.

But a study conducted by economists at The University of Wisconsin and Ball State University, did find a "statistically and economically significant association" between in-person voting and the spread of COVID-19 after Wisconsin's April 7, 2020, primary election.

So whether voting by mail is critical this election to avoid a spike in COVID-19 cases or just as a more convenient way to cast a ballot, understanding how it works is the first step.

How Does Voting By Mail Work?

Voting by mail, which is also referred to as absentee voting, means you cast your ballot without visiting a polling place either on Election Day or during early voting. Instead, you receive your ballot in the mail and complete it off-site, then return your ballot by mail or via an official dropbox, which is usually on the property of a government building, according to Marilyn Marks, executive director of the Coalition for Good Governance, a nonprofit, nonpartisan group focused on election security and transparency.

Mail-in ballots typically come with two envelopes — one for the ballot, which you should hand mark in indelible ink, and one that serves as an outer envelope, which you sign. After making your selections on your ballot, you then put the ballot inside the inner envelope. Next, you place that envelope inside the outer envelope for mailing or dropping off. Some states also require a copy of your voter's ID.

Once your polling officials receive your ballot, they will verify your signature on the exterior envelope against the signature they have on file and confirm that you are an eligible voter — and that you haven't already voted. The inner envelope is passed on, and your ballot inside is counted by a different polling official. When it works as it should, the two-envelope process ensures secrecy.

Maine allows voters to hand-deliver their ballots to a ballot box at the City Clerk's office in City Hall.
Ben McCanna/Portland Press Herald via Getty Images

Pros and Cons to Voting By Mail

According to the National Conference of State Legislatures (NCSL), mail-in ballots allow voters more time to review and study the issues, which leads to increased convenience and satisfaction. There are benefits for the jurisdictions too, like financial savings because mail-in ballots reduce costs for staffing and equipping polling places. And when voting by mail processes are followed in a legal and fair manner, neither political party would be advantaged, Marks says.

There is evidence of increased voter turnout, too, when states move to all-mail ballots, according to NCSL. However, the level of voter turnout for allowing voting by mail as a choice, rather than providing mailed ballots for all voters, is less clear.

Despite the obvious convenience factor, voting by mail comes with some potential disadvantages. If it cuts down on staffing and polling location expenses, there could be an uptick in printing and postage costs, according to NCSL. Voters may also mismark ballots — either overvoting or undervoting. These are mistakes that voting equipment at polling locations could catch.

Problems with mail delivery can hinder voters from receiving their ballots, as well, a situation Fulton County, Georgia, voters faced before the June 2020, primary. Native Americans on reservations without specific street addresses or low-income citizens who move frequently may be particularly affected, too. These issues also cause challenges for in-person voting, too.

Still, Stacey Abrams, founder of Fair Fight, an organization that works to promote voter participation and to end voter suppression, who incidentally had issues with her mail-in ballot in Georgia's June primary, believes mail-in voting as an option should be widespread.

"Voting by mail is safe, secure and convenient," Abrams said in an emailed statement sent to HowStuffWorks. "It allows voters to better engage with democracy by providing time to research the candidates and positions that best reflect their values."

In some states, voters can simply drop off their ballots at their polling place, rather than mailing it in.
MEGAN JELINGER/AFP via Getty Images

So do all states allow voting by mail? Currently yes. Every state permits some type of absentee voting, according to Marks.

"It is really a question of how restrictive or liberal they are," she says. Voting by mail varies greatly state to state, though. In fact, no two states are the same.

Some states have what's called "no excuse" voting, which means you don't need to provide a reason to vote by mail. A handful of states mail out a ballot automatically to every registered voter. California recently became one of them. Five states conduct all elections entirely by mail, including Colorado, Hawaii, Oregon, Washington and Utah.

"Other states have far more restrictive requirements," Marks says. They might limit voting by mail to specific reasons a voter cannot get to the polling place, such as being out of town on Election Day, or being an older citizen. Oftentimes, a voter needs to apply to get a ballot by mail.

"There is no uniform answer," Marks says. "You need to check with your local county to see what their rules are."

(From left) Maritza Gonzalez and Maria Novales work on opening mail-in ballots in Reading, Pennsylvania to be counted on June 3, 2020, after the state's primary election.
MediaNews Group/Reading Eagle via/Getty Images

How Are Mail-in Ballots Counted?

By law, mail-in ballots are always counted if they can be determined to have come from eligible voters, Marks says. When the ballots are counted, however, depends on the state. For example, in Colorado, ballots can be counted 15 days before the election; in Georgia, though, no ballot counting is permitted until the afternoon of Election Day.

To keep track of who voted in person and who voted via a mailed-in ballot — and to make sure no person did both — polling officials consult electronic polling "books" that are updated in real time.

Paid employees count the ballots, while volunteers appointed as watchers and advocates for the candidates or parties oversee the process. In states like Colorado, which sees a significant number of mail-in ballots, the counting is mostly automated. But in states like Georgia and North Carolina where there has traditionally not been a lot of voting by mail in the past, "sheer people power" must get the job done, Marks says.

Is Fraud Higher With Voting by Mail?

"I have been fighting against mail-in ballots for years," Marks says. "But let me be clear. Some people truly need to vote by mail-in ballots. I'm all for no excuse mail-in ballots if you need that. However, it is not a secure way to vote."

Yet, Marks' concerns about mail-in voting are not the same as those claimed by some politicians, including those from Donald Trump.

Marks worries, instead, about things like the voter coercion, which could include a spouse telling — and forcing — their partner how to vote; a boss pressuring employees to bring ballots to work to fill them out together in the company's favor; and landlords "helping" tenants fill out ballots and even collecting them along with the rent. She says she's witnessed many of these firsthand.

Also, when volunteers are counting mail-in ballots, they decide whether to count the ballot based on the information the voter included on the outside envelope, including the voter's signature and date of birth.

During this process, there is potential for human deceit, but the issue, Marks says, is not that people are voting multiple times and stuffing the ballot box. Instead, situations arise like what happened in 2018 in Georgia's Gwinnett County. Voting rights activists, including the Coalition for Good Governance, accused polling officials there of rejecting a disproportionate percentage of mail-in ballots from Asian American and African American voters because of missing birthdates, address discrepancies and signatures that didn't match registration records. Marks blames a lack of transparency in the ballot-counting process.

"If you are a voter who feels you really need to protect the privacy and secrecy of your ballot, you probably shouldn't vote by mail," she says. "It is not as private of a process, particularly in rural counties. That's the not the way it's supposed to work, but human nature takes over."

A woman casts her ballot in Wisconsin's presidential primary election on April 7, 2020. A followup study traced a significant rise in cases of coronavirus back to the primary.
KAMIL KRZACZYNSKI/AFP via Getty Images

So should states make mail-in ballots more accessible during the 2020 presidential election simply because of the unprecedented times? Marks say yes, with stipulations. "We should definitely encourage and facilitate mail-in ballot voting during the time of the pandemic," she says. "This year, I am strongly encouraging mail-in ballots, although it is not what I would push, promote and advocate for longer term."

Along with those mail-in ballots, though, she recommends more transparency in the process by authorizing poll watchers who can get close enough to the process to see whose ballots are being rejected.

Fair Fight's Abrams agrees. "Amid COVID-19, anyone who is able to cast an absentee ballot should do so to better protect themselves and to make in-person voting safer for all who need it," she said in her statement to HowStuffWorks. "I encourage everyone to call on their senators to pass the HEROES Act to expand access to vote by mail and better ensure a free and fair election."

One concern the National Conference of State Legislatures raises about mail-in voting is over the loss of tradition. Going to a polling place to cast a vote is an experience many enjoy sharing with family members. If states move to all voting by mail, many would lose this source of national pride.

Carrie Whitney, Ph.D. "Vote By Mail: What You Need to Know for the 2020 Presidential Election" 7 July 2020.
HowStuffWorks.com. <https://people.howstuffworks.com/vote-by-mail.htm> 8 March 2021
Citation 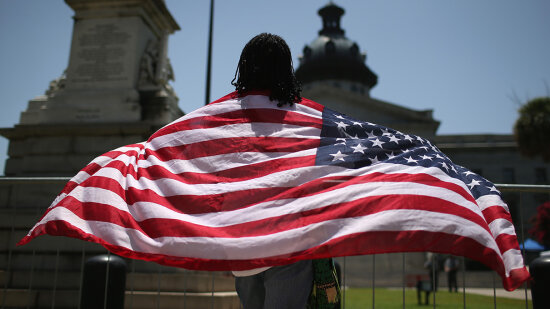 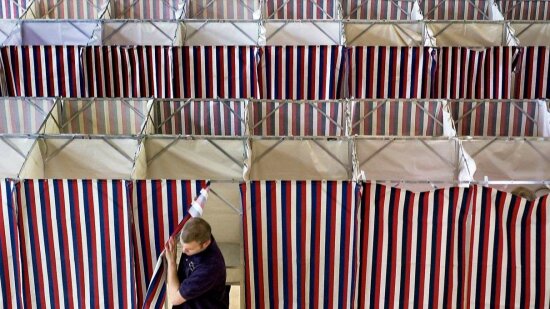 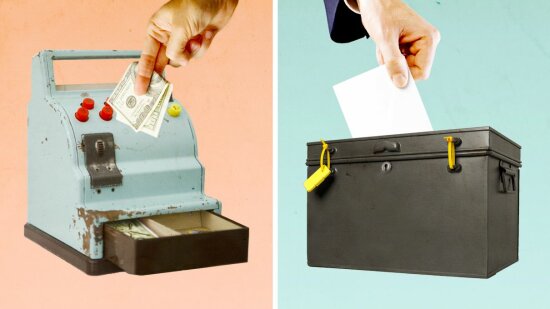