Effectiveness of the Virtual Border Fence 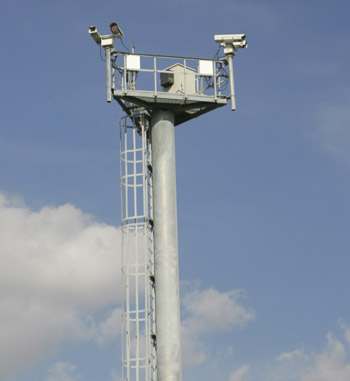 Towers similar to this one form part of the virtual and physical fences, using sophisticated cameras and other technology to monitor the border.
James Tourtellotte/U.S. Customs & Border Protection

Tracking the effectiveness of border security is a difficult task. Does the number of arrests of illegal immigrants and drug traffickers indicate success? If there are fewer arrests, does that mean people are being deterred by the fence or simply finding another way around? If there are more arrests, does that mean more people are slipping into the country unnoticed or that enforcement has improved? These are questions that commentators, politicians and law enforcement officials continue to ponder.

What's beyond dispute is that the virtual border fence uses top-of-the-line technology. Some aspects of the virtual fence have been used before along the California-Mexico border and in Iraq and Afghanistan, but never before have so many diverse technologies come together to police one border. Will that give law enforcement the upper hand, or will a network of up to 1,800 towers, each with its own set of cameras, radars and other devices, overwhelm the understaffed Border Patrol? Again, answering these questions will take time. But critics point to past efforts at boosting border security in which billions of dollars have been doled out, frequently with disappointing results. The fence along parts of the California-Mexico border is still unfinished after 13 years of construction and is far over budget. In other cases, contracts were awarded only to have cameras not installed, numerous false alarms and an increase rather than a decrease in illegal traffic. On April 25, 2007, the Border Patrol's sole Predator 2 drone, a $6.5 million unmanned aerial vehicle frequently used by the U.S. military in Iraq and Afghanistan, crashed in Arizona after only seven months of use.

Border security is an issue that many Americans care strongly about. Proponents of virtual and physical fencing point not only to the need to decrease illegal migrant traffic but also to concerns about drug smuggling and terrorism. On December 14, 1999, Ahmed Ressam was stopped and arrested near a Canadian border crossing. He was on his way to Los Angeles to attempt to blow up Los Angeles International Airport as part of the "Millennium Plot." Border security advocates cite this foiled terrorist operation as evidence that improving border security goes beyond stemming illegal immigration.

For more information about the virtual border fence and other related topics, check out the links below.