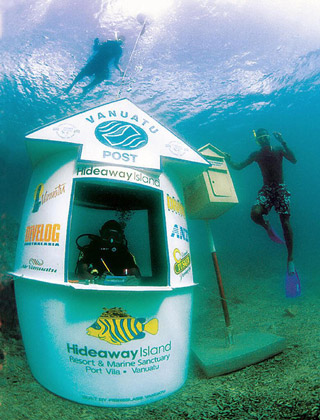 Think one underwater mailbox in the world is enough? Welcome to the fierce competition global competition taking mail collection to new extremes.

In Susami, a small fishing town in Japan's Wakayama prefecture, mailing a postcard can mean donning a wetsuit and oxygen tank to reach an officially sanctioned postbox stationed 33 feet (10 meters) under the surface of Susami Bay.

The postbox was installed in 1999 as a way to entice visitors to linger as they made the Kumano Kodo pilgrimage, traveling a 1,000-year-old network of trails that stretch across Japan's southern peninsula. At the time, the undersea postbox was the town's only tourist attraction, the brainchild of then-70-year-old postmaster Toshihiko Matsumoto.

Since then, the mailbox has become a popular point of interest, with divers mailing about 1,500 postcards each year. To do so, they have to visit a local diving shop, purchase water-resistant postcards and scrawl a message on them using oil-based markers. Once a week, a shop employee puts on scuba gear to collect the contents of the underwater postbox, and ferries it to a local post office where the postcards enter the standard mail delivery system.

Snorkel or scuba is the only way to reach this Pacific underwater post office.Craig BeruldsenAFP/Getty Images

But Susami's got some competition because of a new contender on the scene. In August 2015, Pulau Layang Layang in Malaysia installed what's currently the world's deepest underwater postbox. At 130 feet (40 meters) below sea level – four times deeper than the Japanese box, the island hopes this mailbox will attract diving enthusiasts and tourists seeking a postmarked souvenir.

And these aren't the only unique postboxes in the world. You're more likely to need snowshoes than a scuba gear to reach the Port Lockroy Post Office.

The post office, located on a British base in Antarctica, opened in 1944 and processes about 70,000 pieces of mail during its November to March operating schedule, says spokeswoman Sarah Brereton via email interview. It's also known as the “Penguin Post Office” for its proximity to a sizeable Gentoo penguin population.

If you think a Polar Penguin Post Office is remote, consider this mailbox atop an active volcano. The Vanuatu postbox is located near the fiery rim of Mount Yasur. The active volcano, on an island in the South Pacific, erupts more than a dozen times an hour. What's that unofficial U.S. mail carrier's motto again? "Neither snow nor rain nor heat nor gloom..."

Are women better politicians?
What's Next for the Green New Deal?
10 Countries Besides the U.S. That Have Electoral Colleges